NASA has locked in its next launch date for its Artemis 1 mission, which will be the liftoff of the Space Launch System (SLS) rocket that'll carry the Orion spacecraft to the Moon.

The Artemis 1 launch has sadly been postponed a couple of times now, the first launch attempt was postponed over a fuel leak which has since been fixed, and the second was postponed due to Hurricane Ian making landfall in Florida. The space agency has locked in a new launch date window that stretches 69-minutes on November 14, with NASA also requested backup launch opportunities for Wednesday, November 16, and Saturday, November 19 - both are two-hour launch windows.

The launch of Artemis 1 marks the first launch of the Artemis Generation, which will be a series of missions that will return astronauts back to the Moon for the first time in 50 years. Artemis 1 mission will essentially be a reconnaissance mission to the Moon and back, a journey that will be more than half a million miles and lay the foundation for future Artemis missions. The launch of Artemis 1 will send the Orion spacecraft on a journey further than any spacecraft has flown before, testing every system that will be used in future Artemis missions to ensure the safety of astronauts once they climb aboard.

With the data gathered from, hopefully, a successful Artemis 1, NASA plan to fine-tune essentially the exact same trip with Artemis 2, but this time with a crew. Artemis 2 is planned to be the first crewed spacecraft to travel beyond low Earth orbit since Apollo 17 in 1972, and the astronauts aboard Orion will be on the spacecraft for 21 days. 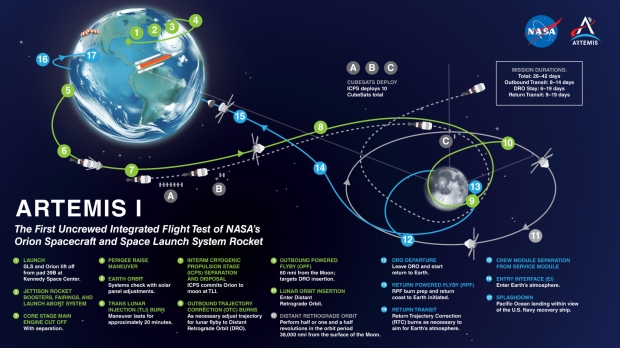 Artemis 3 is the big one, and will take into account all of the data that has been gathered through performing Artemis 1 and Artemis 2. Astronauts aboard the Orion spacecraft will touchdown on the lunar surface, which is scheduled to launch sometime in 2025. NASA has already selected possible landing locations, with many being at the Moon's south polar regions. Notably, NASA plans on having two astronauts land on the surface of the Moon and stay there for about one week.