Intel reached out to me a few weeks ago now asking for my address so they could send me Arc A770 and Arc A750 graphics cards, but after covering Arc negatively -- not just opinion pieces, but sourcing leaks and rumors -- got me put on the back burner. Don't worry, Intel promises that I might get a card, one day.

Well, after the tiniest graphics card sampling round in my career, and now Intel's new Arc A770 and Arc A750 graphics cards are in the hands of... well... people who obviously don't push Intel back too much. I think 95% or more of the reviewers who were cherry-picked, were even alive when Intel launched the i740 on AGP... but I digress. 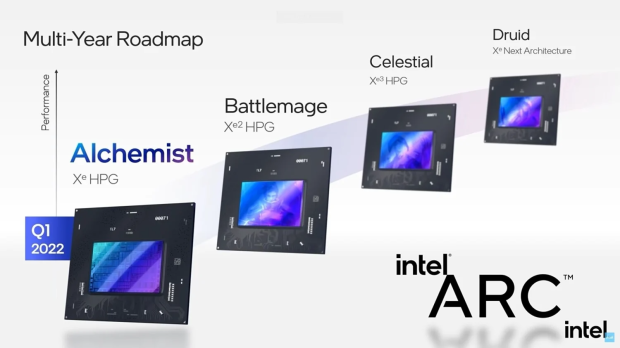 Oops, Intel said Arc Alchemist would launch in Q1 2022... well, I guess being over 6 months late is cool now

Intel's new Arc Alchemist GPU architecture was initially unveiled close to FOUR YEARS ago back in January 2019, when Intel posted an inspirational video on Twitter that featured ex-RTG boss and now AXG boss Raja Koduri, as well as former Intel CEO Bob Swan. In the video, Intel was recruiting staff, while Raja was saying that Intel was effectively starting from zero in discrete graphics.

Raja said that the Intel GPU team saw this as an "opportunity for unleashing the discrete graphics from the constraints of integrated graphics". In an interview just recently with ex-PC Perspective's Ryan Shrout and ex-NVIDIA's Tom Peterson (both at Intel AXG now), Raja said he didn't think it (launching a GPU) would be this hard, yet in January 2019 he said that Intel's IP portfolio at the transistor, firmware, and software levels is "amazing".

Well, I guess it wasn't that amazing... how is Intel's process node movement going? Intel Arc GPU control panel software is a total mess, no DX9, 230W power draw... but hey, buzzwords. Now former Intel CEO Bob Swan said at the time (January 2019) "that's what Intel has been about for the last 50 years, and that's what we expect to do with discrete graphics going forward". Well, I guess this is the start, guys.

Pricing is aggressive, but did you really think Intel would be pricing Arc A770 higher than $349? I mean, they can't compete with anything from this generation from NVIDIA and AMD, and can only compete against a couple of cards on the lower-end of the Ampere GPU and RDNA 2 GPU scale, let alone the higher-end $500+ or $1000+ graphics cards on the market.

Raja Koduri, looking at the teleprompter WAY too much

Intel is having to give away games and software that far exceed the cost of the Arc GPUs on their own, which says more than you need to know.

If you read through some of the reviews, you can see they're grinding their teeth through those reviews, so I'm kinda glad I didn't get sourced one directly by Intel. Kissing that ring isn't worth it, especially when people think there will be a "timely" follow-up to Arc with Battlemage...

But the September 2022 story that Arc had been "effectively cancelled" and that the "decision has been made" to axe the GPU team did 90-100x (yes, those numbers are correct) the traffic that the review of the Arc A770 and Arc A750 graphics cards would've netted TweakTown.

In that article, I reported from leaker Tom at Moore's Law is Dead that his sources said Intel has cancelled discrete Arc GPUs internally and that Intel wants to compete against AMD and NVIDIA but it simply can't from a financial perspective (Intel has bled out $3.5 billion on AXG and its Arc GPU efforts so far, and lots of investors, the public, gamers, and analysts are NOT happy about it).

Hell, in the above article you've got Jon Peddie from JPR saying that Intel should shut the GPU department down completely, with Jon adding: "So, the rumor mill has been hinting that the party is over and that AXG would be the next group to be jettisoned".

At the end of the day, should you care about Intel Arc? Nope, not right now. Wait until Battlemage at the very least, you know AMD and NVIDIA graphics cards JUST WORK, without having to worry about having a 10th Gen Core CPU or above (or AMD Ryzen 3000 series CPU or above).

You don't need to worry about old DX9 games not working, or using 230W+ of power for a proud mid-range GeForce RTX 3060 graphics card that uses far less than that.

Instead of Just Buy It, Just Wait It Out.