Leading into the launch of Arc A-series GPUs on the desktop, Intel AXG boss Raja Koduri sat down with Ryan Shrout and Tom Peterson to talk all things Arc. Koduri talked about building the Arc Alchemist GPU architecture and bringing it to market -- something the company teased nearly FOUR YEARS ago if you can believe it.

Koduri also talked about the issues of working on the Arc GPU architecture during the pandemic, with teams working from home, some in the labs, some debugging, some everywhere. The ex-RTG boss and father of Vega discussed optimizing software for the Arc GPUs, especially APIs like DirectX 11 -- an API that Arc GPUs don't perform well with whatsoever.

We all know that Intel has been experiencing many issues with its Arc GPU -- hardware, software, and more -- with Koduri confirming this during the chat. Even Koduri said that he didn't think it would be this hard... and that it will be a constant journey, an Odyssey if you will. No idea why Intel isn't liking the negative press its Arc GPU is getting, if the father of the Arc GPU -- Raja Koduri -- is here saying it himself.

Hey Intel, if Arc is so good then more reviewers would have your cards... I have a mountain of RTX 4090s sitting here right now and I haven't even sniffed an Arc PCB yet.

1-2 days away from getting the feedback -- TAP and Shrout are physically moving everywhere, probably signs of stress if I were a body language expert -- with TAP audibly sighing -- Koduri continuing "from the reviews and all". Koduri continued, saying "also, we're not done yet... until we see that moment... so... but, you know it's a combination of... first, gratitude. 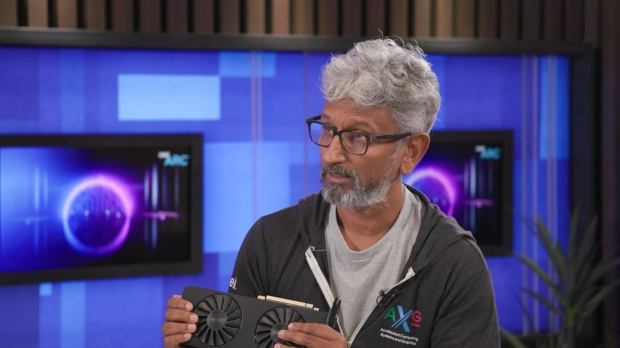 Lots of teams have worked very hard for a long period of time, and politically, the COVID period... we had no idea frankly, right, it's basically the chips were coming back but everybody was still at home. Few people are going to the labs, and getting hardware guys, software guys, platform engineering guys, uh, and all of them debug, new architecture, and many of them are new teams, they haven't worked with each other through production of a new GPU".