Picking up sustained wind speeds of 120 mph, Hurricane Ian pounded the western tip of Cuba with incredibly strong winds and is now making its way toward Florida.

According to reports from AccuWeather, Hurricane Ian has already become the strongest storm to make landfall in Cuba since 2017, and now the major hurricane has picked up intensity growing from a Category 3 hurricane to a Category 4 that is currently traveling over the eastern Gulf of Mexico. Meteorologists expect Ian to make landfall along the west coast of Florida on Wednesday during the late afternoon, hence the warnings that have already been sent out to residents in the danger-zone area that stretches from Tampa to Fort Myers.

Reports indicate that Ian will lose some intensity after breaking into a Category 4 storm as it will experience wind shear, which will disrupt the wind speed. However, AccuWeather forecasters still recommend Florida residents that are deciding to stay within the evacuation zone to prepare for a full-force major hurricane that will bring flooding, rain, high-speed winds, and likely coastal waters rising. 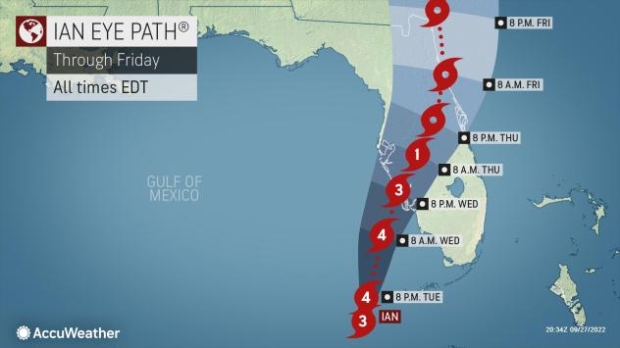 NASA has taken to its International Space Station (ISS) Twitter account to share some images of Hurricane Ian moving across the ocean towards Florida, gaining in strength just south of Cuba. The images showcase the sheer size of Hurricane Ian and how views some space can really put into perspective of the true scale of the planet and the size of naturally occurring events such as hurricanes.

Hurricane Ian has caused many residents to flee their homes to safer locations, and NASA has done the very same but with its Space Launch System (SLS) rocket for its Artemis 1 mission. The large rocket was rolled back into the Vehicle Assembly Building at NASA's Kennedy Space Center in Florida on Monday to shelter it from the coming major storm. The decision by NASA to roll back the SLS rocket into shelter came after updated weather predictions for the coming Hurricane Ian indicated it was going to impact the Kennedy area.

If you are interested in reading more on that story, check out the link below.