The company has now confirmed that it's using an RDNA 2-based GPU with two Compute Units, based on a 6nm IOD die on the AM5 package, which is a new "disintegrated" way that the new Ryzen chiplet design allows. The chiplet design gives AMD the ability to upgrade and mix chiplets in future-gen Ryzen processors. 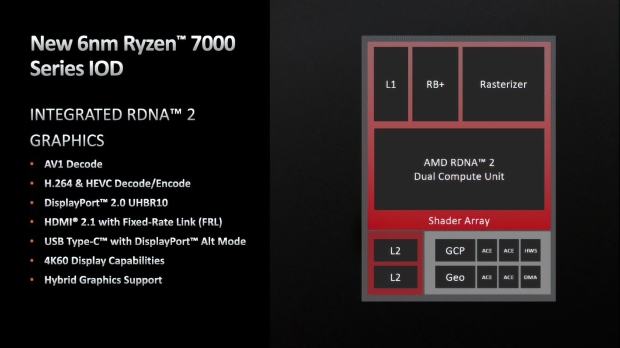 As for the RDNA 2-based GPU, it has great video encoding and decoding abilities, with support for decoding and encoding H.264 and H.265 as well as AV1 decoding support. AMD even has DisplayPort 2.0 UHBR10 support in its new Ryzen 7000 series CPU and its integrated RDNA 2-based GPU. 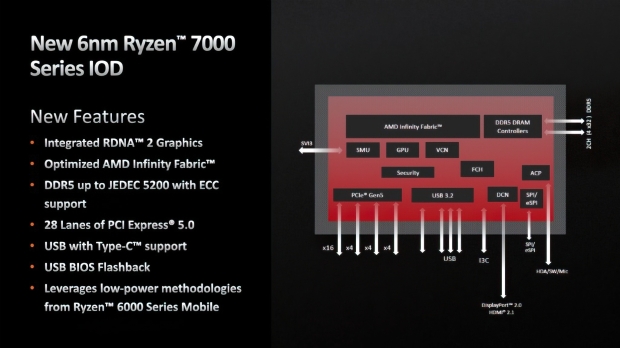 The RDNA 2-based GPU inside of the Ryzen 7000 series "Zen 4" desktop CPUs also has HDMI 2.1 display connectivity, DisplayPort 2.0, and Type-C DP mode. This now means that both AMD and Intel (with its new Arc GPUs) have DisplayPort 2.0 support, and NVIDIA... don't. As I said in my article, in the headline actually, it's very, very silly.

AMD's new I/O die supports DDR5-5200 JEDEC memory specs, which is decent compared to Intel's 12th Gen Core "Alder Lake" which supports DDR5-4800 memory out of the gate. The new Zen 4-based IOD die also supports up to 28 lanes of PCIe 5.0, which can be tapped with next-gen GPUs and SSDs of the future.