DisplayPort 2.0 display connectivity is nearly here so the Video Electronics Standards Association (VESA) has just announced a new certification program... and I don't know if it makes things any easier for consumers, like, at all. 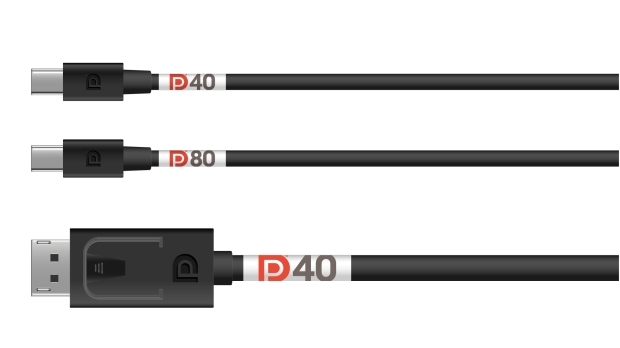 VESA has announced the new DisplayPort UHBR (Ultra-high Bit Rate) data transfer rates that the next-gen DisplayPort 2.0 standard will offer, with the introduction of the new DP40 and DP80 UHBR cables. In the future, you'll see DP40-marked cables that are good to support the UHBR10 standard (up to 10Gbps across four lanes, for up to 40Gbps of bandwidth).

Meanwhile, DP80-marked cables will support the UHBR20 standard (up to 20Gbps across four lanes, for up to 80Gbps of bandwidth). The higher bandwidth unleashes new capabilities: uncompressed 8K 60Hz HDR, 4K at up to an insane 240Hz with HDR, 2 x 4K 120Hz with HDR, or a bonker 4 x 4K 60Hz with HDR -- all over a single cable -- mighty impressive.

James Choate, compliance program manager for VESA explains: "The ultra high bit rates supported with the DisplayPort 2.0 specification bring a whole new level of display performance and experience to the consumer. By establishing the UHBR Certification Program, we hope to speed adoption of higher-performance video and display products across the ecosystem".

"We expect results from this program to be similar to the success achieved with other VESA certification programs, including those that have enabled widespread ecosystem adoption of products supporting DisplayPort HBR3 bit rates, as well as the DisplayPort Alt Mode and DisplayHDR specifications and standards".

"No matter how high the performance of your graphics card and monitor are, the resulting image quality can still be limited by the cable used to connect those devices. Thanks to improvements in both the DisplayPort connector and cable design, the new VESA certified DP40 and DP80 UHBR cables enable consumers to get the highest performance possible from their VESA certified devices. These new cables are backed by VESA's UHBR Certification Program, which provides added assurance that if your cable has the DP40 or DP80 logo from VESA, it will meet the specs for the highest data rates supported by current and future products certified by VESA".