As we get closer to the big GeForce Beyond special broadcast at NVIDIA GTC 2022 in just over 13 hours' time, we're hearing more and more about AMD's new Radeon RX 7000 series "RDNA 3" GPUs.

AMD has posted up a new "Advancing Performance Per Watt to Benefit Gamers" article on its website, where the company details how important, and how much work it has put into performance per watt. NVIDIA's next-gen GeForce RTX 4090 is expected to have a default 450W TGP, and a massive 660W+ TGP when overclocked, so it comes as no surprise that AMD is highlighting power efficiency. 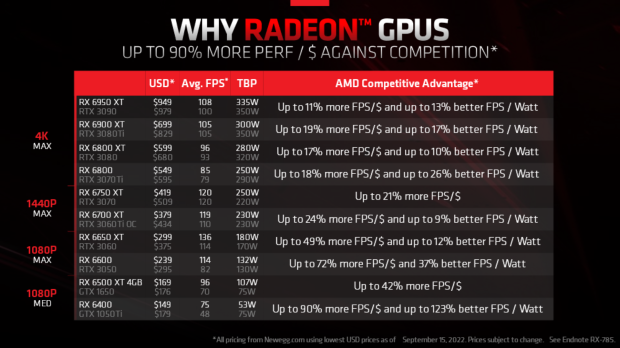 In the article, AMD answers why performance per watt is so important: producing less heat, consuming less power, and enjoying more performance over longer periods of time on top of saving money (power is getting more expensive worldwide). AMD put everything it learned from their successful Ryzen desktop and mobile processors into their Radeon graphics architecture to make RDNA 2 an "extremely efficient GPU architecture".

AMD compares its fleet of RDNA 2-powered Radeon RX 6000 series GPUs against NVIDIA's current Ampere-based GeForce RTX 30 series in what it calls the "AMD Competitive Advantage". Starting at the top, AMD's flagship Radeon RX 6950 XT with a cost of $949 and 335W TBP offers up to 11% more FPS for the money and up to 13% better performance per watt.

To further refine and improve the AMD RDNA™ 2 graphics architecture and deliver greater efficiency and performance gains, the team implemented several other key changes, including:

Sam continued: "Looking ahead, we're continuing our push for more efficient gaming with AMD RDNA™ 3 architecture. As the first AMD graphics architecture to leverage the 5nm process and our chiplet packaging technology, AMD RDNA™ 3 is on track to deliver an estimated >50 percent better performance per watt than AMD RDNA™ 2 architecture - truly bringing top-of-the-line gaming performance to gamers in cool, quiet, and energy-conscious designs". 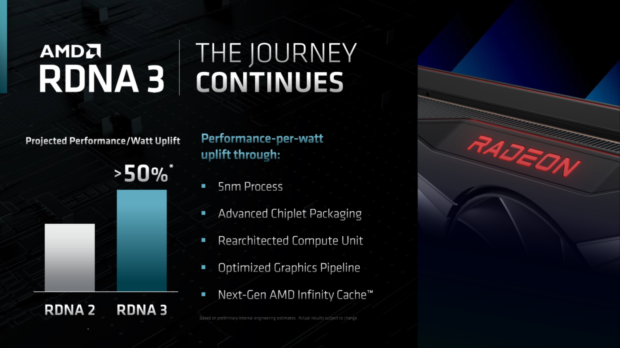 Contributing to this energy-conscious design, AMD RDNA™ 3 refines the AMD RDNA™ 2 adaptive power management technology to set workload-specific operating points, ensuring each component of the GPU uses only the power it requires for optimal performance. The new architecture also introduces a new generation of AMD Infinity Cache™, projected to offer even higher-density, lower-power caches to reduce the power needs of graphics memory, helping to cement AMD RDNA™ 3 and Radeon™ graphics as a true leader in efficiency".

"We're thrilled with the improvements we're making with AMD RDNA™ 3 and its predecessors, and we believe there's even more to be pulled from our architectures and advanced process technologies, delivering unmatched performance per watt across the stack as we continue our push for better gaming".