Discord user Sincarnate, whose real name is Jason Allen, posted on a Discord server about his recent win at the Colorado State Fair's fine art competition.

Allen is the president of Incarnate Games, a tabletop gaming company based out of Colorado. Allen won first place in the digital art category of the state's competition with a submission called "Theatre D'opera Spatial," which he printed on canvas. However, to create the artwork, Allen used artificial intelligence (AI) software called Midjourney, directing it to make the final piece using prompts instead of drawing it himself.

Allen's work has attracted the ire of many digital artists and enthusiasts online, with Twitter users proclaiming that "we're watching the death of artistry unfold before our eyes - if creative jobs aren't safe from machines, then even high-skilled jobs are in danger of becoming obsolete."

Allen addressed the issue in the Midjourney Discord server, saying he knew his submission and placing would be controversial but noting that the people "who are against AI generated art are the first ones to throw the human under the bus by discrediting the human element," referring to the artistic direction he supplied to Midjourney.

When asked for comment by VICE's Motherboard, Allen alluded to a "special prompt" that he has used to create hundreds of images, which he ultimately refined to the one that was submitted to the state fair. Allen said that he intends to publish his prompts "at a later date."

Allen also noted that his submission was clearly labeled with "Jason Allen via Midjourney." Still, he expects that artificial intelligence art categories will be created one day to avoid future controversy and give art such as his a place to thrive. 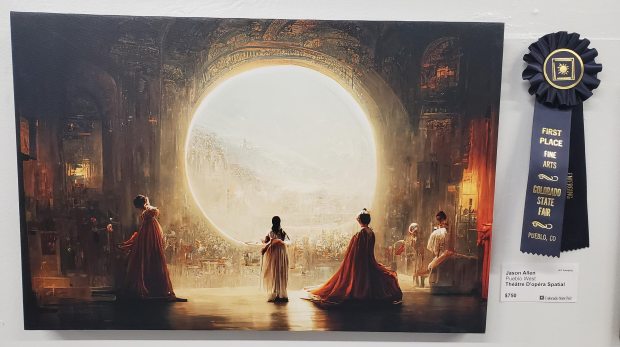