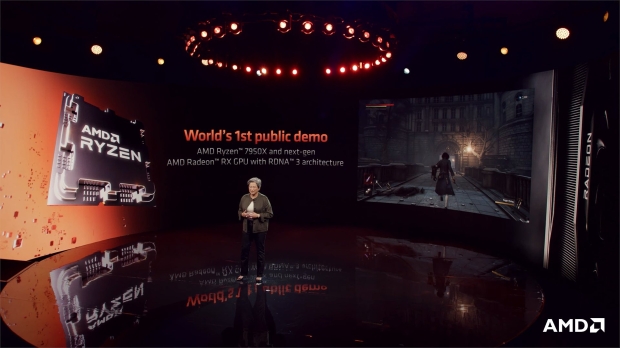 During the live stream, AMD CEO Dr. Lisa Su showed off what AMD is playing around with internally: their new Zen 4-powered Ryzen 9 7950X processor with 16 cores and 32 threads of CPU power at up to 5.7GHz with their new RDNA 3-based GPU in the world's first public demo. Out of all of the games on the planet, AMD tested its next-gen GPU silicon with Lies of P.

The game was run at 4K on Ultra graphics settings, with the Ryzen 9 7950X processor and a pre-production RDNA 3-based Radeon RX 70000 series GPU. We don't know the exact specs of the new GPU just yet, but the flagship model is expected to feature AMD's next-gen Navi 31 GPU that should pack 12288 Stream Processors, and 24GB of GDDR6 memory and also be made on TSMC's 5nm process node: just like the new Zen 4 processors.

Navi 31 is the flagship GPU based on the RDNA 3 graphics architecture, which will reportedly feature 1 x GCD (Graphics Chiplet Die) and 6 x MCDs (Memory Chiplet Dies). Each of them will contain 16MB of Infinity Cache, joined by GDDR6 memory and 64-bit wide PHYs according to the report. Navi 31 is expected to rock out with 48 WGPs (Work Group Processors) and a 384-bit memory bus using GDDR6 memory