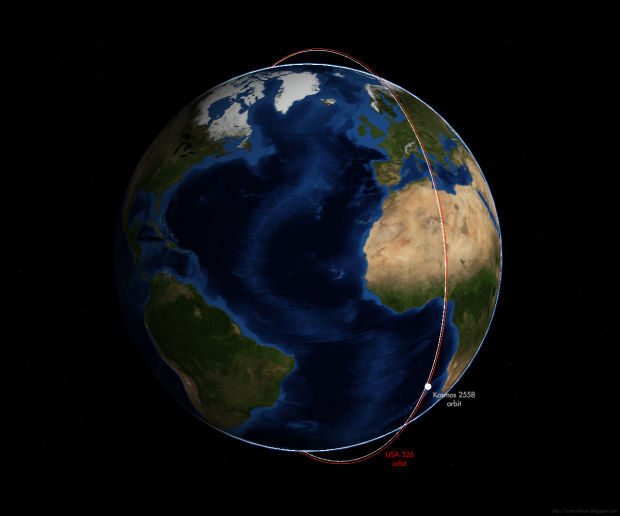 Kosmos 2558 is suspected of being an "inspector" satellite, launched to keep tabs on the U.S imagery intelligence (IMINT) satellite and has been tracked since launching by Marco Langbroek, a satellite tracker from the Netherlands. The orbit of Kosmos 2558 differs from that of USA 326 by only 0.04 degrees, and its altitude is about 60 kilometers (37.28 miles) below that of USA 326.

Kosmos 2558 made its closest approach to the USA 326 satellite on August 4th, coming as close as 67 kilometers (41.6 miles) to USA 326, though most of that distance was due to altitude difference. The capabilities of the U.S. satellite are unknown, so it's not possible to know if similar satellites have been launched previously.

"That's really irresponsible behavior. We see that it's in a similar orbit to one of our high-value assets for the U.S. government. And so we'll continue like we always do, to continue to update that and track that," said Gen. James H. Dickinson, Commander of U.S. Space Command (SPACECOM) in an NBC Nightly News report.

Russia has been known to launch similar inspector satellites, launching Kosmos 2542 and Kosmos 2543 in 2020 to keep track of the KH-11 electro-optical reconnaissance satellite USA 245, launched in 2013 as the last official spacecraft to be sent to orbit for the Keyhole program.