The footprints were spotted by researchers from Cornell University and the Far Western Anthropological Research Group. 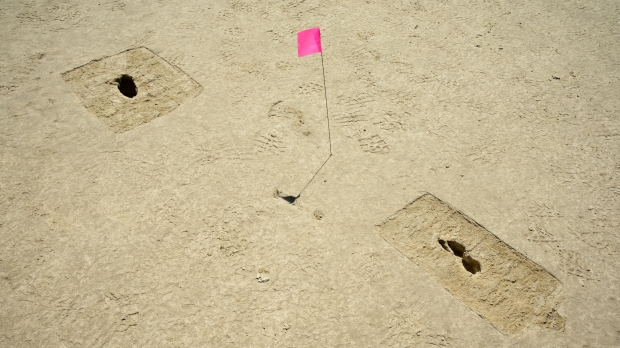 Driving along the salt flats at the United States Air Force's Utah Testing and Training Range (UTTR), they spotted "ghost tracks" that only appear when the moisture conditions are right before disappearing again. They returned to the site the next day with ground-penetrating radar, and more tracks were discovered, created by bare feet and totaling 88 footprints from adults and children.

"Based on excavations of several prints, we've found evidence of adults with children from about five to 12 years of age that were leaving bare footprints. People appear to have been walking in shallow water, the sand rapidly infilling their print behind them - much as you might experience on a beach - but under the sand was a layer of mud that kept the print intact after infilling," said Daron Duke of the Far Western Anthropological Research Group.

Wetland conditions haven't been present in the area for over 10,000 years, with the researchers saying the footprints are likely more than 12,000 years old. The last ice age ended 11,700 years ago, meaning these footprints were left by humans who lived during the last ice age. Further research is being conducted to verify their age and to uncover any other potential archaeological finds.

You can see additional photos and read more from the Air Force's press release here.