NVIDIA is waiting and watching to see what AMD can accomplish with its upcoming RDNA 3-based GPU architecture and its flagship Navi 31-based Radeon RX 7000 series graphics card. 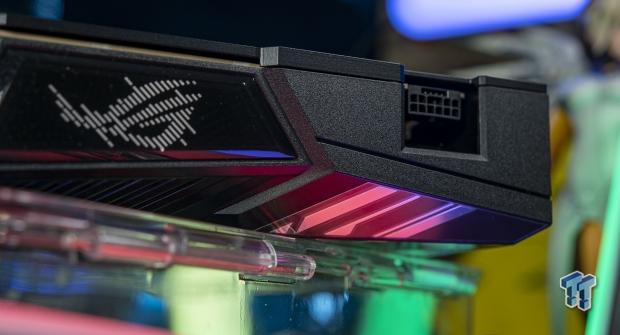 So much so that it will be holding back the power on its GeForce RTX 4090, preparing a 600W beast, if RDNA 3 can fight for the next-gen GPU performance crown, according to the latest from Tom @ Moore's Law, who says that NVIDIA will launch AD102 in 450W first in October, and wait to see how Navi 31 performs for AMD once RDNA 3 is released.

NVIDIA doesn't want to be put in the position where the release their best GPU yet in some higher-class "TITAN" form, and have it lose to a consumer RDNA 3-based GPU. NVIDIA can't, and won't let that happen... so we wait for RDNA 3. I think NVIDIA should just do it, don't wait, just put down right now.

Release it all, like the Kraken. Do it anyway, so hard and fast AMD can't respond with enough Navi 31-based Radeon GPUs. If it's about not getting a wrinkle in Jensen's leather jacket, then you're not feeling enough g-forces, geddit.

AMD has been building its new RDNA 3 architecture for many years now, with the Navi 31-based Radeon RX 7900 XT (or RX 7950 XT, RX 7970 XT) and its MCD-based chiplet design to branch away from how it (and NVIDIA) have previously built GPUs for their consumer graphics cards. 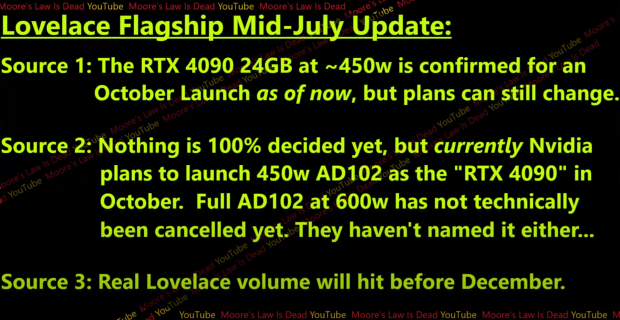 Tom explains: "there are a few good reasons for NVIDIA to tell their partners 'hey, look we're sure 450W, we're sure that's the 4090, prepare the groundwork for making a 600W card, but just prepare it and standby for now'". He continues: "until NVIDIA knows exactly the tippy top performance of RDNA 3 -- they don't technically know where they need to get the 4090 Ti to -- if the 4090 launches and takes the performance crown... then they can just wait". According to his sources, this is what we're to expect:

Tom continued: "They can tell their AIBs 'hey, take all the time you need in the world... in fact we're actually going to wait to learn a little bit from the 4090, redesign the board a little bit like we did with the 3090 Ti... maybe even wait for GDDR7... and then we can launch that in some flagship we know AMD can't touch early or mid next year, or even if they know AMD can't touch it they may actually wait to December to accelerate it -- kinda like the TITAN Volta situation -- where they say 'hey, we've got this 48GB card, it's going to use 600W, it's the new TITAN, AMD can't touch it. Get the future early with us".

"Or of course, if they know that they're not going to win the performance crown... they're just going to tie -- well, that's when they go -- oh launch the 4090 Ti 600W right away. DON'T call it the TITAN. We don't want anybody to ever beat a card again that we call a TITAN".