Apple's new M2-powered MacBook Air is in some hot water... with its new fanless laptop being redesigned, and yet, unable to run on a sustained workload without huge drops in performance. 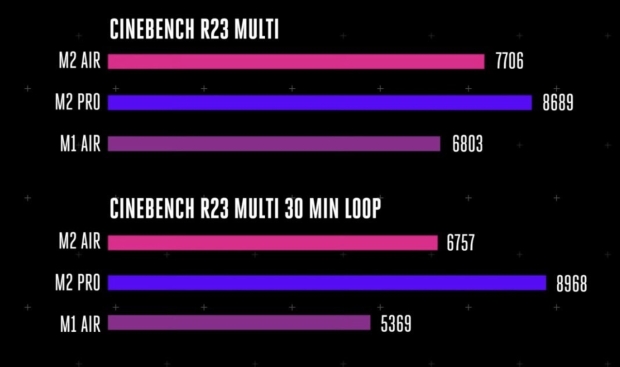 In the first test, it's just the regular Cinebench R23 benchmark where the performance results in a score at the end: the previous-gen M1 Air scores 6803, while the new M2 Air scores 7706. But when they're run on a 30-minute loop, the performance drops to 5369 and 6757 points for the M1 Air, and M2 Air, respectively.

Yet, the entire time the higher-end fan-cooled M2 MacBook Pro sustains its performance, without a drop -- it actually scores better over time with 8689 points for the Cinebench R23 benchmark run -- but sustained over the 30-minute loop the M2 MacBook Pro pushes higher to 8968 points. So yeah, the fan really, really helps inside of the new M2-based MacBook Pro, something Apple really should've included.

Yeah, it looks cool being all fanless and stuff... but when the design is hurting performance? No, that's not cool (if you'll pardon the pun) at all.

I wouldn't want my name on a product that goes out that is dropping 20-25% performance because you're using it, that is absolutely stupid. Apple should be marketing this with "our design sucks, and because we aren't using a fan for X reason, you will be paying full price but experiencing performance throttling for the most part, kthx".

No, that shouldn't be happening at all... because even photo and video editing on this laptop is going to be strenuous enough to cause thottling.