It's not something big at all, but it's something: a new leak on Intel's upcoming Arc A770M mobile GPU, which has been benchmarked in some 3DMark runs alongside the slower A550M GPU. 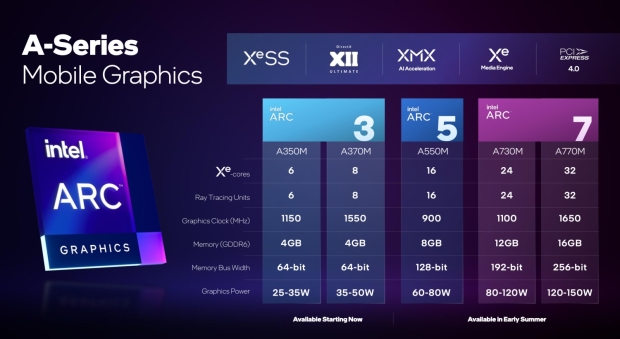 We're hearing about the Intel Arc A770M and A550M GPUs from leaker "@_rogame" with some 3DMark Fire Strike Extreme (1440p) benchmarks. The lower-end Intel Arc A550M has 16 Xe-Cores, and scores 6017 points in 3DMark Time Spy using the older 1726 driver, but this benchmark was using Intel APO (Advanced Performance Optimizations) enabled... which as VC points out "basically renders it invalid as per 3DMark rules".

This means that the Intel Arc A550M is much slower than the A730M, but so it should be: it has half of the ACM-G10 GPU cores.

The higher-end Arc A770M GPU scored 13244 with the 'graphics score' which means it keeps up with NVIDIA's current GeForce RTX 3070 Laptop GPU (when accompanied by an Intel Core i7-12700H in a gaming laptop in other 3DMark benchmark runs). We don't know if APO is running here, but the test driver version is 9999 (something that OEMs and system integrators before launching new hardware).