Intel's upcoming Xe-based ARC Alchemist might be getting teased and hyped right now, but what about known gaming performance? Well, we don't know much yet... just leaks.

Tom over at Moore's Law is Dead has said that the Intel ARC Alchemist and its Xe GPU drivers are in a "horrible state" and that it will see the gaming-focused Alchemist GPU competing with the GeForce RTX 3060. In his new video, Tom explains it's: "hard to say what the final performance will be yet, as the drivers are in a horrible state. I mean worse than Vega a half a year before it came out state, and it's half a year before Xe launches".

Tom continues: "But that's always been Intel's goal [to compete against the RTX 3070, or RTX 3070 Ti] and every piece of information I've leaked so far about Xe has been correct, so, I don't think that's out of the realm of possibility".

"Having final confirmation that performance will be at a certain level, is probably worrying NVIDIA and that's why they're probably going to start trying to be nice to system integrators -- that, and also the news that AMD will be releasing a 6nm version of Navi 22 and Navi 23".

We are a while away from the official launch, but it's something that everyone needs to remember: keep your hype levels in check. We can't be expecting Intel to come out and have a monster GPU with perfect drivers and game compatibility... there's going to be a lot of unforeseen circumstances and crushed expectations in some ways.

But every month is going to get better between now and when Intel launches its ARC series gaming GPUs, and even better once gamers are using an Intel GPU in their system and more games are played on their GPUs, support from developers will improve. 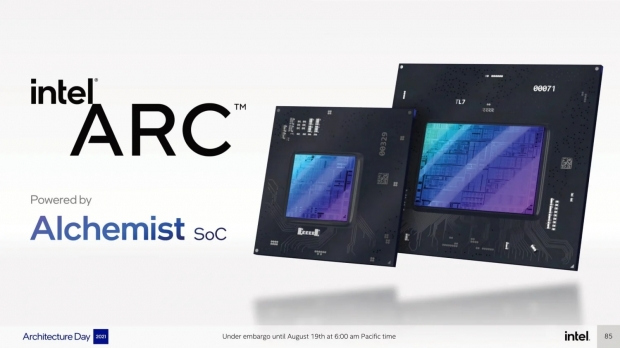