If you are currently holding any Bitcoin and have been watching the price of the world's most valuable digital currency, you have been witnessing a bloodbath.

The price of Bitcoin has been in a downward spiral for many months now, with Bitcoin reaching its all-time high of $69,000 back in November 2021. Since then, the digital cryptocurrency has been slowly declining in price and fell off a hypothetical cliff in early when the price dropped from approximately $35,000 at the beginning of May to $26,000 by the beginning of June. Within the first two weeks of June, the price dropped by an additional 30% to $20,000. 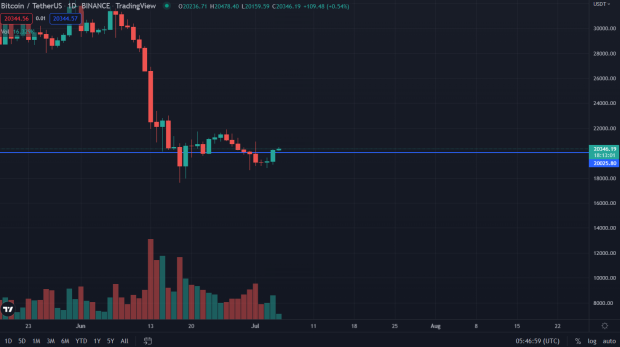 Notably, Bitcoin's price is currently sitting at just over $20,000, and now analysts are saying that Bitcoin, for the first time since breaking below the $20,000 price point, "has successfully created Bullish Divergence on the Daily Time Frame", according to Matthew Hyland. Cointelegraph contributor Michael can de Poppe said, "Flipping $19.5K is a trigger for Bitcoin". Does this mean that Bitcoin will continue its uptrend?

Unfortunately not, and while it seems like a breath of fresh air in a seemingly ever-down-turning market, Bitcoin's price may still continue to bleed as there is still mass uncertainty plaguing the wider global economy. The war in Ukraine and its effect on the worldwide economy, the collapse of Terra, and the Federal Reserve raising interest rates as just some of the many big factors that are influencing the price of Bitcoin.

It's highly advised to do your own research before investing into any cryptocurrency projects. Research should also be conducted with the intention to develop a broader picture of the market and its movements. Essentially, don't rely on one source of information to inform your decisions.