The cryptocurrency market is currently a bloodbath, with a sea of red candles splattering the charts as the price of Bitcoin continues to tumble.

In the first week of June to the 20th of June, the price of Bitcoin has plunged 30%, taking the already declining price from approximately $30,000 to its current price of $20,000. The sharp decline resulted in the total global market cap for all cryptocurrencies to dip below $850,000 billion, with coins such as Ethereum being half its value than it was a month ago. The world's second largest cryptocurrency is currently trading at around $1,000, marking the first time it's traded at that price point since January 2021.

The bloodbath may not be over, as billionaire investor "Bond King" Jeffrey Gundlach, the CEO of asset management firm DoubleLine Capital recently stated that he believes Bitcoin's price could tumble further. Gundlach said he wouldn't be "surprised at all" if Bitcoin's price dropped a further 50% from its current price, putting the once valued at $60,000-cryptocurrency at $10,000.

"The trend in crypto is clearly not positive. I mean it topped out a long time ago. Remember, I was with you in July of last year, and Bitcoin was up at like $60,000 or something. And then it dropped down to $30,000...

The billionaire investor went on to explain that he isn't "bullish" at $21,000 or $20,000 and that the recent dips may be an indicator of a coming economic across the digital asset space.

"We've had such a huge decline in parts of the stock market. Emerging market equity year-to-date is down 15%. Most equities are down. Nasdaq's down 28%, Bitcoin is down 53% year-to-date and 45% just since the last Federal Reserve meeting.

We've already seen around the edges some blow-ups in parts of the crypto world and that could be foreshadowing some problem."

Bitcoin's all-time high of $69,000 was reached in November, 2021, and since then, it has been in a slow decline. From January to March, the cryptocurrency fluctuated between $35,000 and $45,000, and from April until the current date, the price has been in sharp decline.

In other cryptocurrency news, SpaceX and Tesla CEO Elon Musk has revealed that he is still buying his favorite cryptocurrency, while its price has significantly reduced as it was $0.41c in June 2021, and has experienced a sharp 91% decline from its all-time high of $0.73 achieved in May, 2021. 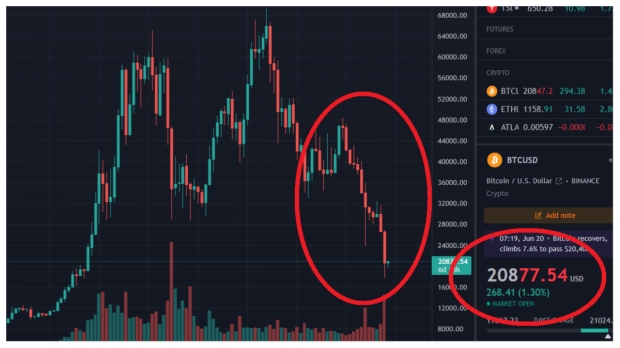