An image of a mysterious creature has recently gone viral, causing thousands of individuals to speculate online what species it could be.

The image comes from the City of Amarillo Twitter account that shared a screenshot from security camera footage taken at the Amarillo Zoo. The Twitter account explains that in the early hours of May 21, 2022, a mysterious creature was caught on film at approximately 1:25 AM. The Twitter account speculates that the creature could possibly be a person with a strange hat on or a "chupacabra," which is a legendary creature in folklore that feeds on livestock by drinking their blood.

The City of Amarillo described the creature as an "Unidentified Amarillo Object", and palmed the question off to the public to try and find out what it could be. As you can probably imagine, many people were happy to provide theories, some rational and possible, and some just claimed that the image was doctored and fake.

Notably, no one theory was proven to be correct, but a few did stand out. One Twitter user proposed that the creature was simply a human in a fur suit and that the image was staged so the Amarillo Zoo would generate more business off the back of the mystery.

Another Twitter user suggested that it could simply be a drunk human in a fur suit and a strange hat wandering outside the Amarillo Zoo in the early hours of the morning. This Twitter user cited the object that appears to be the creature's left hand, saying it could possibly be a beer bottle.

Regardless of what you think of the theories listed in this article, nothing has been confirmed, and the mystery, as well as the creature, remains at large for interpretation.

If you are interested in more reading more stories that are unsolved, check out this shipwreck that was recently found. Countries are debating who has the right to claim its treasure which is estimated to be worth $17 billion. More on that story can be found below.

Read more: Shipwreck found with $17 billion worth of precious treasure aboard 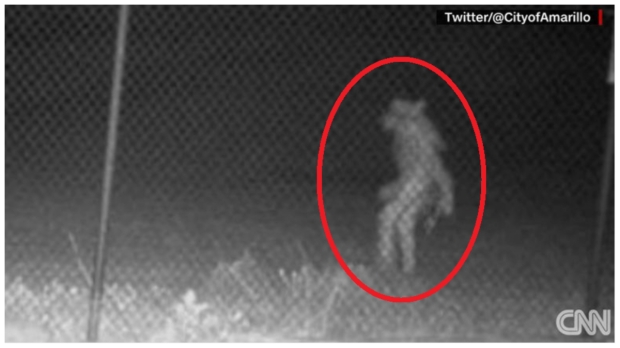