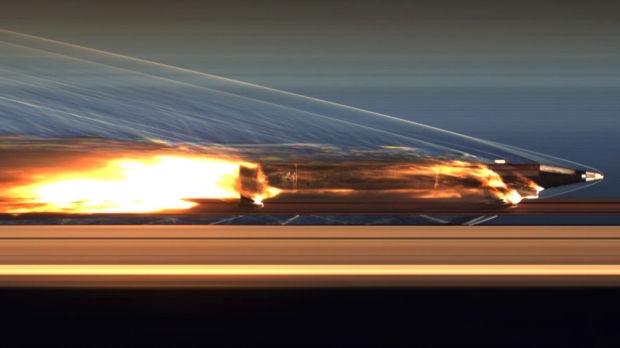 The 846th Test Squadron conducted testing of the hypersonic sled at the Holloman Air Force Base in New Mexico in late March 2022. The reusable sled was stopped after reaching speeds of 6,400 feet per second on a monorail, equivalent to about Mach 5.69, or almost 5.7 times the speed of sound. The test was performed on the Holloman High Speed Test Track (HHSTT) and was the fastest sled recovery in more than thirty years.

According to the Air Force, the HHSTT "is the only sled track capable of recovering sleds with test articles from velocities over Mach 5." The vehicle's high-performance braking systems allow it to be recovered for analysis and reuse, which is less often the case with hypersonic aircraft tests. The sled tests bridge the gap between full-scale flight tests and laboratory experiments.

"What you accomplished marked the fastest recovery of a monorail sled in over 30 years, and the first time we have recovered a planned reusable sled at those speeds ever. Truly historic in my books! This could not have been done without everyone here who works at the track," said Lt. Col. Paul Dolce, Commander of the 846 TS.

"These efforts will now setup our future HyTIP [Hypersonic Test and Evaluation Investment Portfolio] runs for success and add a new capability for our hypersonic customers," Dolce continued.