A study on the fossil specimens titled "Thanatosdrakon amaru, gen. et sp. nov., a giant azhdarchid pterosaur from the Upper Cretaceous of Argentina has been published in the journal Cretaceous Research. 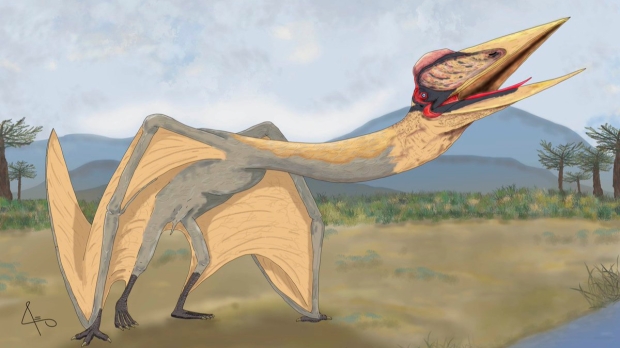 Remains from the largest pterosaur species to have lived have been unearthed in Argentina in South America. Paleontologists found two specimens in the Plottier Formation, located in the Province of Mendoza. The wingspans of each specimen were 23 feet (7 meters) wide and 30 feet (9.1 meters) wide, respectively.

The specimens belong to the species Thanatosdrakon amaru and is the only species within the Thanatosdrakon genus, which belong to the Azhdarchidae family of pterosaurs. Its name derives from "Thanatos," meaning "death," "drakon" meaning "dragon", and "amaru" meaning "flying serpent." The species lived during the Cretaceous period between approximately 145.5 million and 65.5 million years ago, and these particular specimens are at least 86 million years old.

"Azhdarchids were known for their very large skulls - sometimes larger than their bodies - as well as their hyper-elongated necks and short, robust bodies," Leonardo D. Ortiz David, lead author of the study, told Live Science.

"There is no indication in the fossil remains of a degree of parental relationship. However, it can be confirmed that both specimens are of different sizes, and that the smaller one is a juvenile-subadult, and that they were together when they died more than 86 million years ago," said paleontologist Leonardo D. Ortiz David.