A study on the socially aware robot titled "High-efficiency cooling via the monolithic integration of copper on electronic devices" is available on the pre-print server arXiv. 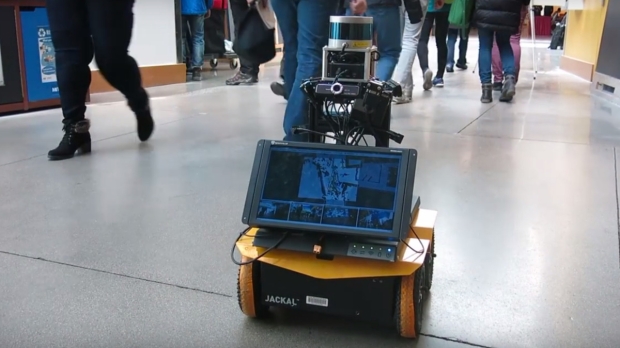 Researchers from the University of Toronto (U of T) have devised a new method for robots to move through the world without colliding with people. Their robot uses Spatiotemporal Occupancy Grid Maps (SOGM) to predict where dynamic obstacles like people will move to with time. This video shows a real-life perspective of the robot moving paired with its internal digital representation.

"The principle of our work is to have a robot predict what people are going to do in the immediate future. This allows the robot to anticipate the movement of people it encounters rather than react once confronted with those obstacles," said Hugues Thomas, a post-doctoral researcher at the U of T Institute for Aerospace Studies in Faculty of Applied Science & Engineering.

In addition to the 3D SOGM maps, the robot is equipped with light detection and ranging, or LIDAR. LIDAR works similarly to radar but uses light waves instead of radio waves. The SOGM network can then distinguish between four categories of LIDAR signals; those from the ground, permanent fixtures like walls, moveable but motionless objects like furniture, and dynamic objects like people.

"With this work, we hope to enable robots to navigate through crowded indoor spaces in a more socially aware manner. By predicting where people and other objects will go, we can plan paths that anticipate what dynamic elements will do," said U of T Professor Tim Barfoot.

You can read more from the University of Toronto press release here and the study here.