On April 22, NASA took to its blog and social channels to showcase an image captured by its Juno spacecraft orbiting Jupiter. 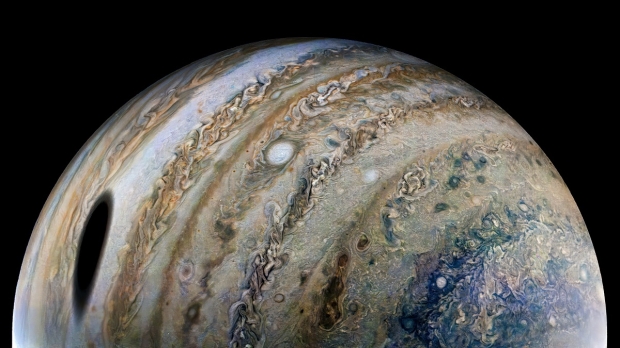 The photograph was captured on February 25, 2022, and features a large oval-shaped shadow on the left-hand side. This shadow is being created by Jupiter's largest of four moons, Ganymede, that is passing between the sun and Jupiter. NASA explains that Ganymede orbits Jupiter at an approximate distance of 666,000 miles and that the Juno spacecraft orbits the large gas giant at a distance of 44,000 miles, which is about 15 times closer than Ganymede.

Furthermore, the space agency explains that Jupiter's four moons frequently pass between the planet and the sun, resulting in shadows such as these being cast. Over the course of seven days, Jupiter's largest moon will pass once, Europa will pass twice, and IO four times, according to NASA. The above image was captured with Juno's "JunoCam". For more information on this story, check out this link here.