NASA is expecting a large asteroid to make a close approach with Earth in the coming days, according to CNEOS database entries. 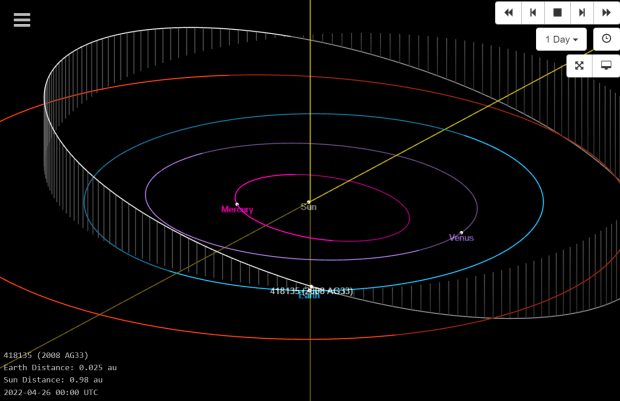 NASA Jet Propulsion Laboratory at California Institute of Technology's Small-Body Database Lookup has listed the space rock 418135 (2008 AG33), which is estimated to be anywhere between 1,150 and 2,560 feet in diameter. 2008 AG33 is scheduled to make a close approach with Earth on April 28 when it will fly safely past our planet at 23,264 miles per hour.

Furthermore, NASA's database states that 2008 AG33 will be at its closest point to Earth when its about 2 million miles away from Earth. For a perspective on just how far away 2 million miles is the moon is 240,000 miles away from Earth. Above is an screenshot of the CNEOS database orbit tracker that shows the asteroids orbit and its position in space in relation to the Sun, Earth and other planets.