The Hubble Space Telescope has been used to observe a distant "wispy" or "ultra-diffuse" galaxy called GAMA 526784. 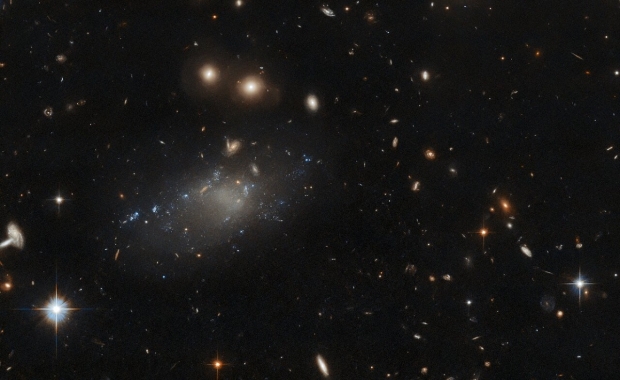 The European Space Agency (ESA) has published a new image snapped by the Hubble Space Telescope, and it showcases GAMA 526784, which is the dimly light region of space slightly left of the center of the image. This galaxy resides in the constellation Hydra and is approximately 4 billion light-years away from Earth.

Notably, GAMA 526784 and other ultra-diffuse galaxies harbor many mysteries that astronomers are yet to explain fully. One of those mysteries is how ultra-diffuse galaxy's dark matter content has only been observed as either extremely low or extremely high. Another is how they contain an unusual amount of globular clusters when compared to other galaxies.

Researchers are yet to explain these mysteries, but images such as the one above are taken to "shed light on the properties of ultra-diffuse galaxies", and hopefully provide insight into them, per the ESA.