The missile is also known as Satan II and was tested for the first time at 15:12 Moscow time (12:12 UTC) on April 20th from a silo launcher. Russian President Vladimir Putin said that the missile would make his country's enemies "stop and think." The missile was launched from Plesetsk in northwest Russia and hit its targets in the Kamchatka peninsula, approximately 3,700 miles (6,000 kilometers) away.

"The new complex has the highest tactical and technical characteristics and is capable of overcoming all modern means of anti-missile defence. It has no analogues in the world and won't have for a long time to come," Putin said.

"This truly unique weapon will strengthen the combat potential of our armed forces, reliably ensure Russia's security from external threats and provide food for thought for those who, in the heat of frenzied aggressive rhetoric, try to threaten our country," continued Putin.

Satan II's design was first unveiled by the Makeyev Rocket Design Bureau in 2016, but has reportedly been in development since 2009. According to Russian news agency TASS, the missile will "enter combat duty in late 2022," replacing the R-36M Voyevoda ICBM Russia currently uses. Satan II can carry a payload of about 10 tonnes, equating to either 10 heavy or 15 light MIRV (Multiple Independently-targetable Reentry Vehicles) warheads, using its Fractional Orbital Bombardment (FOBS) capability to deliver them. 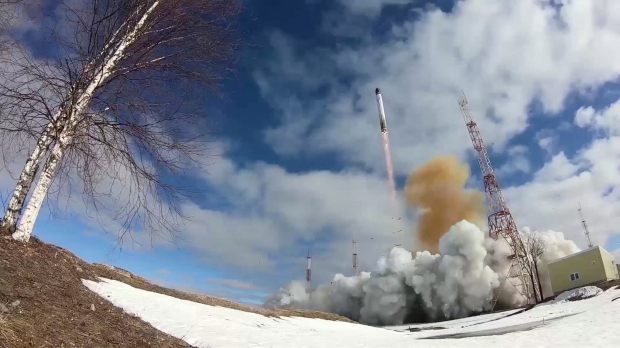