Researchers have claimed that they have excavated a fossil of a dinosaur that died on the same day the asteroid that hit Earth and ended the time of the dinosaurs.

According to researchers led by Robert DePalma, a doctoral student at the University of Manchester, the fossilized dinosaur leg that was discovered is from a Thescelosaurus, a herbivore dinosaur that's name translates to "wonderful lizard" in ancient Greek. The dinosaur leg was found to have its skin attached to it, and according to researchers, there was no previous record of what the skin of the Thescelosaurus looked like before this discovery.

The team of researchers claims that the dinosaur's leg had been ripped off and buried during the asteroid impact that ended the dinosaurs' reign on Earth and created what has now been named the Chicxulub crater in the Yucatan Peninsula. Notably, Robert DePalma in 2019 reported finding fossilized fish that still had gills attached to them. 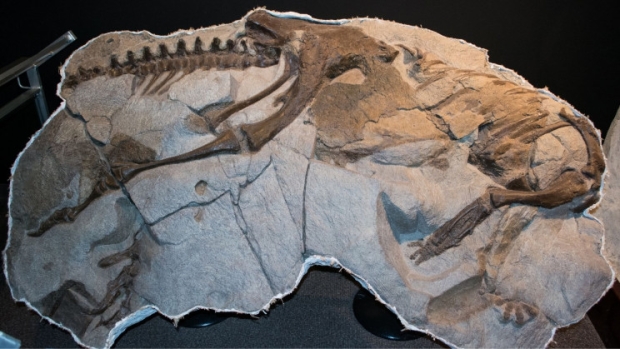 "It's from a group that we didn't have any previous record of what its skin looked like, and it shows very conclusively that these animals were very scaly like lizards. They weren't feathered like their meat-eating contemporaries," said Paul Barrett, a merit researcher at London's Natural History Museum to BBC News.

Within these gills were small glass spheres that were later identified to be around 65.5 million years old and formed from molten rock that was launched by the asteroid impact. The discovery of the fossilized dinosaur leg, and fish gills all came from the North Dakota site.

"Those fish with the spherules in their gills, they're an absolute calling card for the asteroid. But for some of the other claims - I'd say they have a lot [of] circumstantial evidence that hasn't yet been presented to the jury," Brusatte said to BBC News.

It should be noted that the scientific community isn't completely sold on the idea that the dinosaur leg fossil came from a dinosaur that died on the same day as the asteroid impact, and that a study on the fossilized leg has yet to be published in any peer-reviewed scientific journal.

"Those fish with the spherules in their gills, they're an absolute calling card for the asteroid. But for some of the other claims - I'd say they have a lot [of] circumstantial evidence that hasn't yet been presented to the jury," said Steve Brusatte, a vertebrate paleontologist and evolutionary biologist at the University of Edinburgh in Scotland who was asked by BBC News for his take on the claims.

"For some of these discoveries, though, does it even matter if they died on the day or years before? "The pterosaur egg with a pterosaur baby inside is super-rare; there's nothing else like it from North America. It doesn't all have to be about the asteroid," added Brusatte.