Returning to Earth on a Soyuz spacecraft after record-breaking spaceflights, the trio had plenty of time to talk. 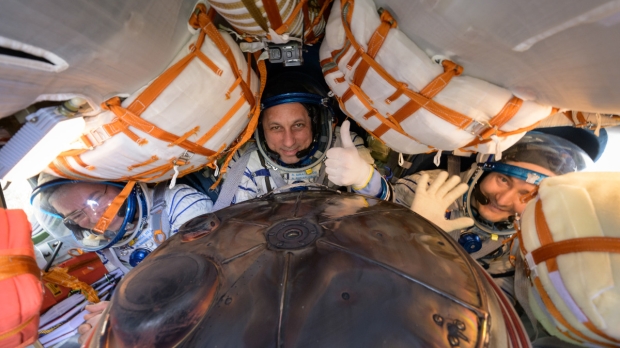 NASA astronaut Mark Vande Hei returned to Earth with his Russian crewmates from the International Space Station (ISS), cosmonauts Pyotr Dubrov and Anton Shkaplerov. Vande Hei said that everyone working on the space station continued working together as normal, despite the geopolitical turmoil on Earth taking place in the wake of Russia's invasion of Ukraine and the subsequent sanctions placed on Russia's space program.

"About my relationship with my Russian crewmates, they were, are, and will continue to be very dear friends of mine. We supported each other throughout everything. And I never had any concerns about my ability to continue working with them," said Vande Hei during a press conference.

"There's varying levels of discomfort for them as well about the situation, but we had a job to do. I did bring [the Ukraine situation] up with both my crewmates that I landed with and all I really feel comfortable saying is there was a variety of responses," Vande Hei told NBC News.

The latest arrival of new cosmonaut crewmates donning yellow and blue spacesuits was another topic that came up, given these are the colors of the Ukrainian flag. However, Vande Hei clarified that these colors were an attempt to recognize the colors of their alma mater, Moscow State Technical University. Vande Hei has also said of Dmitry Rogozin's (the head of the Russian space agency Roscosmos) tweets that he "never perceived those tweets as anything to take seriously."