It is the first time a Soyuz spacecraft has delivered only Russian cosmonauts to the International Space Station (ISS).

The Soyuz MS-21 contained cosmonauts Oleg Artemyev, Denis Matveev, and Sergey Korsakov, who launched from Baikonur Cosmodrome in Kazakhstan at 15:55 UTC on March 18th, 2022. The spacecraft is also the first to dock with the new Prichal module on the ISS, which was launched in November, 2021. They are the last crew members to join Expedition 66 and will transition into Expedition 67 when the remaining crew from Expedition 65 return to Earth.

Historically, Soyuz spacecraft headed to the ISS have always had at least one astronaut from outside Russia or another spaceflight participant. Another interesting twist to this recent arrival is the cosmonauts' spacesuits, primarily bright yellow with blue accents. Blue and yellow are the colors of Ukraine's flag and are a curious choice given Russia's current invasion of Ukraine.

Artemyev, the Soyuz commander, addressed the color of the spacesuits by saying there was a surplus of yellow fabric in the warehouse that resulted in their spacesuits being made in that color. Though the colors appear to be a reference to Ukraine, it is also possible they pay homage to Bauman Moscow State Technical University, which Artemyev, Matveev and Korsakov all attended. 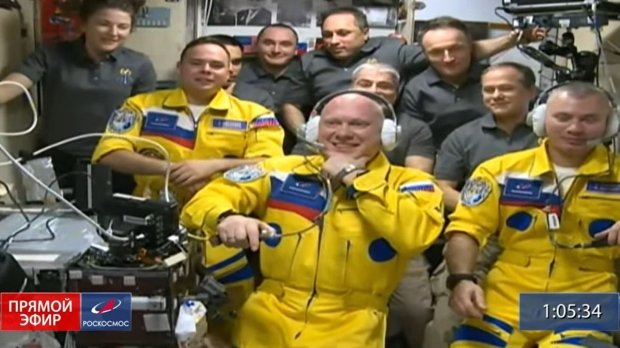