Intel has officially launches its new Arc A-Series Mobile GPUs with the lowest-end Arc 3 GPUs launching now, while Arc 5 and Arc 7 launch in the coming months... but what about XeSS? 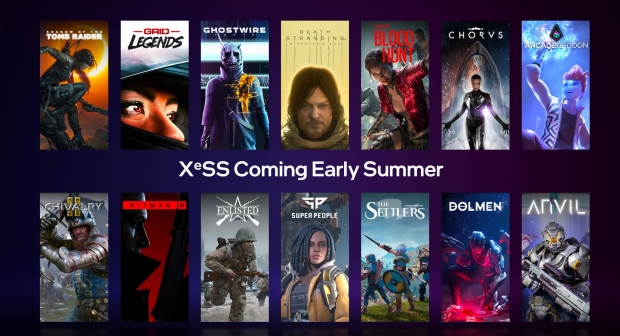 Intel's new XeSS isn't making the launch, with the AI upscaling technology promised for "early summer" which better lines up with the higher-end desktop Arc Alchemist GPUs launching. AMD just launched its new FidelityFX Super Resolution 2.0 (FSR 2.0) while NVIDIA has DLSS 2.3 out (and should launch DLSS 3.0 in the coming months leading into Ada Lovelace).

There is something Intel did confirm: XeSS will support up to 20 games at launch, including big titles like Death Stranding: Director's Cut, Ghostwire Tokyo, Shadow of the Tomb Raider, and many more. We will have a little while to go yet, but things are beginning to get clearer as Intel rolls out its Arc GPUs to the masses.