All NewsBusiness, Financial & LegalCases, Cooling & PSUContests & GiveawaysCPU, APU & ChipsetsDealsDisplays & ProjectorsGamingMotherboardsScience, Space & RoboticsStorageVideo CardsVirtual & Augmented Reality
All ReviewsAll ArticlesAudio, Sound & SpeakersCases, Cooling & PSUCPUs, Chipsets & SoCsComputer SystemsDisplays & ProjectorsGamingMotherboardsNetworkingPeripheralsRAMStorageVideo Cards
GuidesGamingAsk the ExpertsNewsletterAboutForums
RTX 3090 TiRTX 4090Diablo 2GTA 6Halo InfiniteElon MuskRTX 3080HDMI 2.1
It seems like it's all about the Radeon HD 3870 X2 today and AMD showed the cards at their European launch event as well and Fudzilla scored several pictures of the new card on its own. AMD was showing two cards running in CrossFireX, just as they did at the US event that we wrote about here. 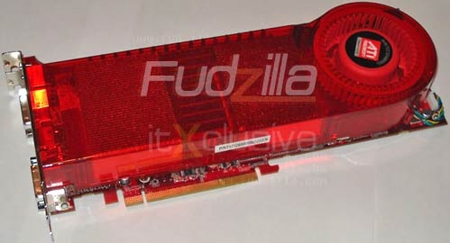 It appears that AMD has castrated the 3870 X2's in terms of one feature, they're limited to having only a single CrossFire connector, which means that it's not possible to run four of these cards in one system, no matter what you do. Each GPU has dedicated memory and our guesstimate is that each GPU has 256MB, at least for now.

According to Fudzilla, the GPU's are clocked at 777MHz, although there's no mention of memory speed. You also need a PSU with an eight-pin and a six-pin PCI Express graphics card power connector to use these cards.

You can check out Fudzilla's pictures here and here
Newsletter Subscription