Bethesda is shutting down its proprietary PC launcher and will move all games and content over to Steam. 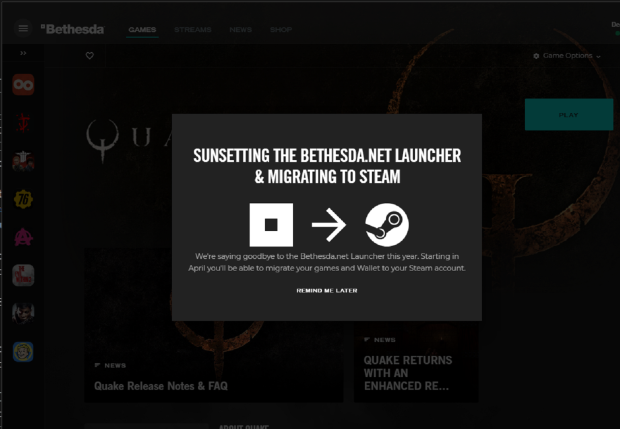 The Bethesda.net PC launcher is being retired in May 2022. Starting in April, gamers will migrate their games ownership over to Steam. Most modern games will have automatic save transfers but some, like Elden Scrolls III Morrowind, will require manual save transfers. Oddly enough, Wolfenstein Youngblood's progress is "currently unable to transfer." All Bethesda.net wallet currencies--Fallout 76 Atoms, ESO drakes, and any money associated with your account--will transfer over too.

Bethesda makes it clear only the launcher is shutting down in May, and gamers will still have ownership access to all of their full games after that period. They just won't be able to launch them from Bethesda.net software. The actual Bethesda.net account services aren't being closed, and you'll still need to make and sign into a Beth.net account to play specific games.

Bethesda had started this process by officially closing the Bethesda.net forums back in 2021, which perplexed many gamers. The forums had been a vital source of information and sharing for millions of gamers across multiple years. Now Bethesda basically utilizes Discord for community engagement, which is disjointed at best.

The launcher was opened in 2016 to help usher its controversial paid mods platform, Creation Club, which has since fizzled out. Since then Bethesda has tried numerous monetization methods including live games like Fallout 76 and Elder Scrolls Online, and putting microtransactions in co-op games like Wolfenstein Youngblood.