YouTube made more money from ads in 2021 than Sony did from PlayStation games. 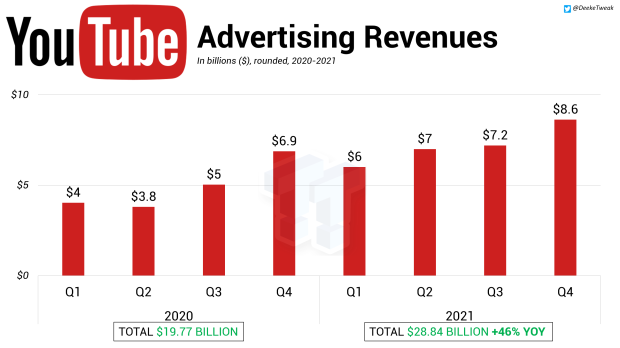 Alphabet recently reported its Q4 earnings, and one of the most surprising figures was YouTube ad revenue. According to data provided by Google, the popular video platform has generated $28.84 billion in total ad revenue through 2021. That's more than the $24.51 billion that Sony made from PlayStation gaming in 2021.

YouTube ad revenue was up nearly 50% year-over-year, driven by record engagement and viewership.

All-told, YouTube made up 11% of Alphabet's mighty $257 billion net revenues for the year. Remember that Alphabet doesn't keep all that revenue--it spent $178.92 billion on costs an expenses. At the end of the year, the company reported $76 billion in net income.

It's worth mentioning that YouTube has some 2 billion MAUs whereas Sony's PlayStation division has roughly 111 million MAUs so the comparison is just a surface level of revenue aimed to give you an idea of YouTube's staggering ad earnings.

YouTube says it plans to embrace Web3, the metaverse, and NFTs in a bid to chase more monetization streams.