A new study on the observation has been published in the journal Nature. 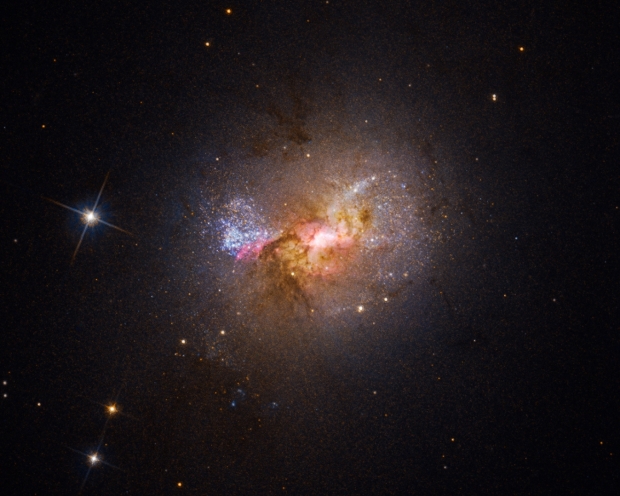 The Hubble Space Telescope (HST) observed the dwarf starburst galaxy Henize 2-10, found 30 million light-years away in the constellation Pyxis. Hubble saw a gas outflow from the black hole at the center of the galaxy reaching into a star-forming region 230 light-years away andfostering the growth of stars, rather than suppressing it.

"From the beginning I knew something unusual and special was happening in Henize 2-10, and now Hubble has provided a very clear picture of the connection between the black hole and a neighboring star forming region located 230 light-years from the black hole," said Amy Reines, the principal investigator for the new Hubble observations.

The gas outflow travels at a relatively low velocity of around one million miles per hour into the dense gas cloud of the star-forming region. The slower flow from a less massive black hole in a dwarf galaxy, compared to the supermassive black holes of other galaxies, allows this gas flow to fuel star growth along its path. Outflow from a larger black hole would heat the gas clouds in this path beyond their ability to cool and form stars.

"At only 30 million light-years away, Henize 2-10 is close enough that Hubble was able to capture both images and spectroscopic evidence of a black hole outflow very clearly. The additional surprise was that, rather than suppressing star formation, the outflow was triggering the birth of new stars," said Zachary Schutte, Reines' graduate student and lead author of the new study.