NGC 6891 exists in the constellation Delphinus, or the Dolphin, and is a bright, asymmetrical planetary nebula. 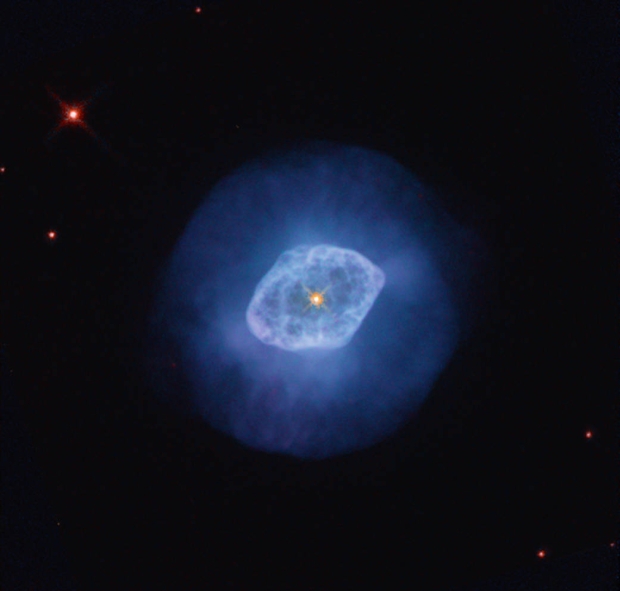 NGC 6891 is a bright, asymmetrical planetary nebula. It is made from gas that has been ionized by the central white dwarf star, stripping electrons from hydrogen atoms in the nebula. The glowing gas of the nebula results from light emitted as electrons lose energy recombining with hydrogen nuclei.

Hubble has captured this image, showing several structural elements, including a spherical outer halo, expanding faster than the inner nebula, and at least two ellipsoidal shells. Astronomers estimate from their motion that one of the shells is 4,800 years old, while the outer halo is 28,000 years old. Also revealed in the nebula's interior are filaments and knots surrounding the white dwarf star in the center. These elements indicate periodic outbursts radiating from the dying star.

This image was posted on NASA's website after an update regarding the Hubble telescope's health following a series of synchronization message errors in late October. Since NASA put Hubble instruments into safe mode, most of them have come back online, with the latest being the Cosmic Origins Spectrograph on November 28th. Three of the four active instruments aboard Hubble are now collecting science data once again.

The Hubble Space Telescope: From Concept to Success