Valve's new handheld Steam Deck has been detailed in a new teardown by the team at Valve during their recent Steam Deck Development Live Stream. Check it out:

In the new detailed Valve Steam Deck unveiling, we find out that AMD's custom "Aerith" SoC is used with a 4-core, 8-thread CPU based on the older-gen Zen 2 architecture with CPU clocks betrween 2.4GHz and 3.5GHz. Next to that we have an RDNA 2-based GPU with 8 Compute Units and GPU clocks of between 1.0GHz and 1.6GHz.

AMD's custom Aerith SoC has a TDP of between 4W and 15W, with Valve asking for developers to enable a frame rate limiter of some sort for the Steam Deck -- while confirming that the company has not pushed any artificial power limit on what the Aerith SoC can use. But if you are outside, Valve has said that the Steam Deck will thermal throttle with the TDP reduced in order to keep the GPU clocks high. 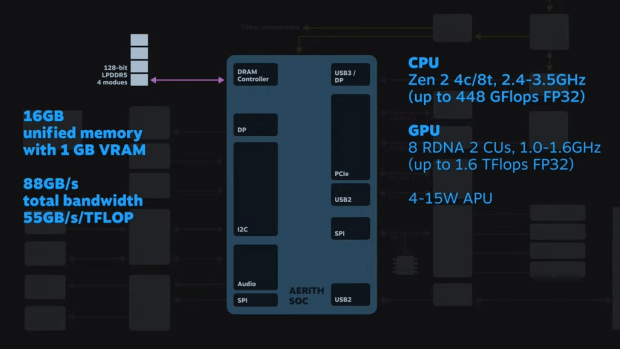 Inside, Valve is using LPDDR5 memory with 16GB of unified memory and 1GB of VRAM used, offering 88GB/sec of memory bandwidth. This means the Steam Deck is "future-proof" with a decent 16GB of VRAM, more than NVIDIA's first flagship Ampere GPU in the GeForce RTX 3080 which has 10GB of VRAM -- but the 88GB/sec of memory bandwidth pales in comparison to a mid-range let alone flagship GPU.

Connectivity and I/O wise, Valve says the Steam Deck supports up to 2 x 4K 60Hz displays with an integrated USB 3.0 Gen 2 and DisplayPort 1.4 with DSC connector. The cable itself is capable of 45W of charging power, where it can both charge the console at full speed and have the CPU and GPU clocks cranking. You can also add on some peripherals, where webcams with up to 7.5W of power can be inside of the 45W power connector.

Valve will be shipping the first Steam Deck handheld consoles to gamers in February 2022.