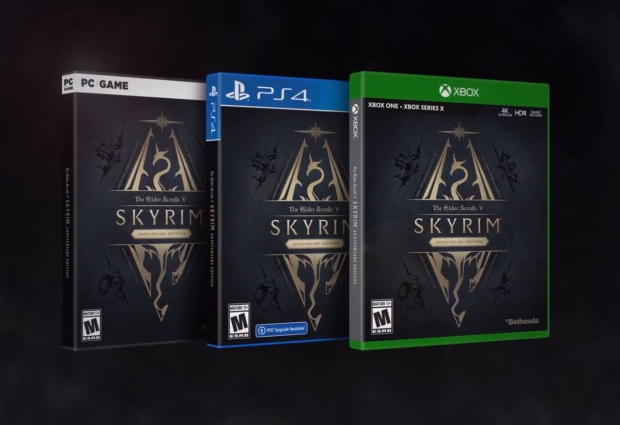 It's been 10 years since the last Elder Scrolls and by the end of the year Skyrim will have been released five times. Thankfully the new sixth version of Skyrim won't be expensive. Bethesda confirmed the upcoming Skyrim Anniversary Edition will cost $49.99 on digital platforms, as opposed to the new $69.99 price of next-gen games and the existing $59.99 MSRP of current-gen titles.

Bethesda also re-confirmed that owners of Skyrim Special Edition on PS4 and Xbox One will get a free next-gen upgrade to the PS5 and Xbox Series X/S versions. The only difference between the Special and Anniversary Editions are Creation Club additions. The Anniversary Edition includes every piece of Creation Club content released to date. Mod support, next-gen optimizations, and the full existing base game are available on both versions.

Special Edition owners can also pay $19.99 to upgrade to the Anniversary Edition. Here's what Bethesda said in a FAQ:

Players who already own Skyrim Special Edition may choose to purchase just the Anniversary Upgrade, which includes all the Creation Club creation content mentioned above in one convenient, high-value bundle.