EA DICE has announced that Battlefield is receiving its first non-binary character, which will launch with Battlefield 2042 as a new Specialist: Emma "Sundance" Rosier.

Battlefield 2042 fans noticed that descriptions for the character had "they/them" pronouns, so one gamer asked EA DICE what was going on. EA DICE community manager Adam Freeman explained: "Yep. Sundance is non-binary and uses the Pronouns They/Them".

"Sundance" has her their own special traits and abilities, with Emma being from France and is an Assault-class Specialist with a wingsuit that allows for faster entry in objectives and tactical situations. Sundance also has Smart Explosives, which can be used to take down enemy aircraft.

There are other Specialists that EA DICE has unveiled so far that are joining the non-binary Sundance character, with hacker Navin Rao from India, shield-equipped Dozer from Mexico, threat-assessing Ji-Soo Paik from South Korea, and healer Angel from Romania. 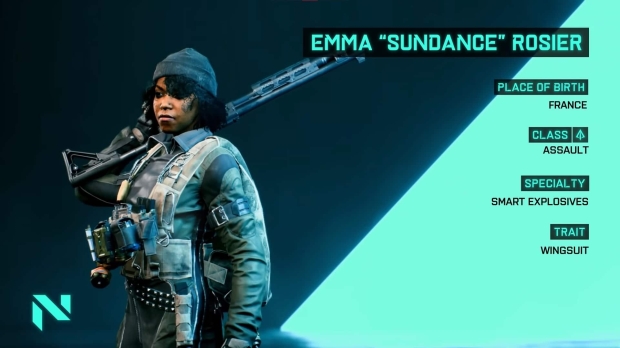