Intel might have everyone excited about its next-gen Alder Lake CPUs on the desktop, but the mobile Alder Lake CPUs are going to be very interesting as well -- especially in a world joined by Apple's enthusiast-class M1 Max SoC that was just announced. 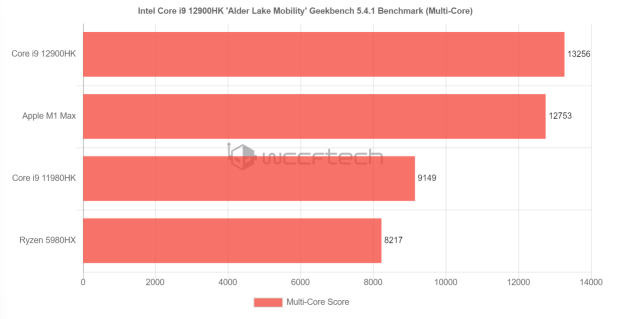 We now have some new numbers on Intel's new Alder Lake mobile CPU from our friends at Wccftech, where it smashes Apple's new M1 Max SoC, its own Core i9-11980HK mobile processor, and the Zen 3-based Ryzen 9 5980HX processor in Geekbench.

But with the first-ever benchmarks of Intel Alder Lake Mobility CPUs, at least in the Core i9-12900HK processor, thanks to Wccftech we can see even Apple's new M1 Max SoC is a force to be reckoned with. The M1 Max beats the Core i9-11980HK and Ryzen 9 5980HX processors, but the new Core i9-12800HK is on top (and so it should be). Apple will win on power efficiency, however.

Everything is at stock here with the Geekbench results, with Wccftech debuting a result of 1851 for single-core performance on the Intel Core i9-12900HK Alder Lake Mobility CPU. This is up against Apple's upcoming MacBook Pro with the flagship M1 Max SoC which is capable of 1785 in single-core score. 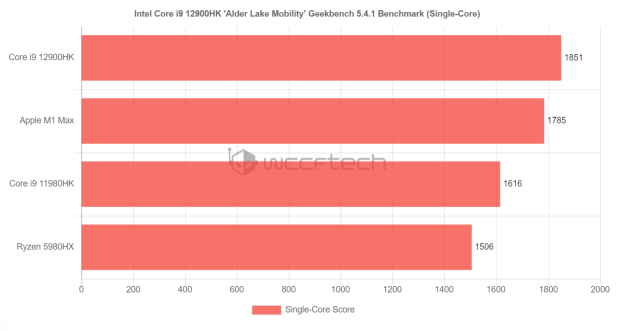 Below that we have Intel's current-gen Core i9-11980HK with 1616, and AMD's current-gen Zen 3-based Ryzen 9 5980HX processor with 1506. Apple has some impressive performance here, and power numbers will beat every processor on this chart.