Apple has quite the beast on its hands with its new M1 Max SoC which was unveiled during Apple's 2021 MacBook Pro unveiling event, with the latest custom silicon made on TSMC's new 5nm process node.

We'll have to wait and see if this means that Apple's new M1 Max SoC is capable of the type of graphics and ray tracing technology + 60FPS that is seen in games like Ratchet & Clank: Rift Apart and Spider-Man: Miles Morales. I have both of those on the PS5 and in Performance RT mode (dynamic 4K 60FPS with ray tracing) it looks absolutely amazing -- driven to the extreme with an LG 4K 120Hz OLED. 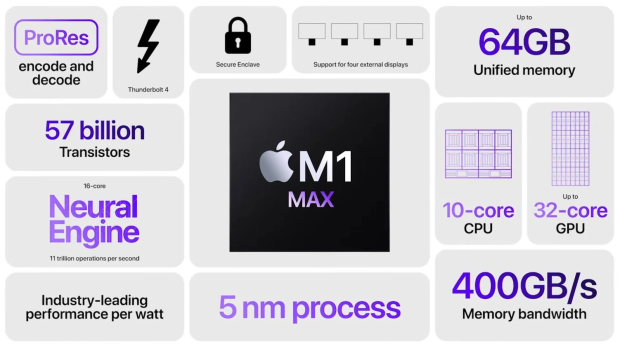 Can Apple's new M1 Max SoC inside of a new MacBook Pro give me those types of graphics with all of this silicon power? Well, I don't think so -- so while we have "the Apple M1 Max is faster than the PS5" it is purely from a TFLOPs / compute performance perspective. This doesn't translate to "games will look as good as the PS5 on the new MacBook Pro".

From a technology perspective, it's damn impressive to see Apple cram this much performance into the 5nm node M1 Max SoC and I can't wait to get some hands-on with the new flagship 16.2-inch MacBook Pro laptop.