Eyes open, no fear: a massive solar flare will be smashing the planet today, with possibly power grid disruption and even seeing Northern Lights as far south as New York. 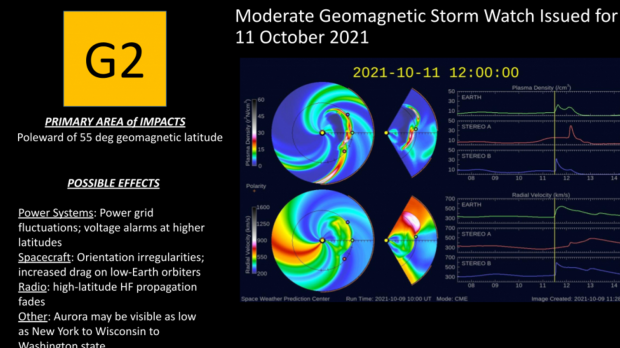 The US National Oceanic and Atmospheric Administration (NOAA) has said that a geomagnetic storm could cause power grid fluctuations, as well as satellites possibly being affected too. NOAA added that satellites could experience "orientation irregularities" that would force ground control to manually redirect them -- as well as anything else in low-Earth orbit.

NOAA explained: "Event analysis and model output suggest CME arrival around midday on 11 Oct, with lingering effects persisting into 12 Oct". Meanwhile, the Met Office added: "Aurora is possible through [the] 11th across much of Scotland, although cloud amounts are increasing, meaning sightings are unlikely".

"There is a slight chance of aurora reaching the far north of England and Northern Ireland tonight, but cloud breaks and therefore sightings are more likely in Northern Ireland".

You can read more about this here, but I think we'll be safe -- although it's always good to be cautious.