Amazon's New World MMORPG is the hottest new game on Steam (but hopefully your GPU is staying cool).

It's a brave new world for Amazon, a company who has spend millions on troubled games development. With its fresh MMORPG New World, Amazon's bet into gaming seems to be paying off--at least when it comes to player adoption.

According to SteamDB, New World has amassed a 707,230 peak concurrent player count during launch and has penetrated Steam's top-10 concurrent players charts in just 24 hours. Right now New World sits at #5 after nudging out Valheim (502,837 players). That's a whole lot of sales. 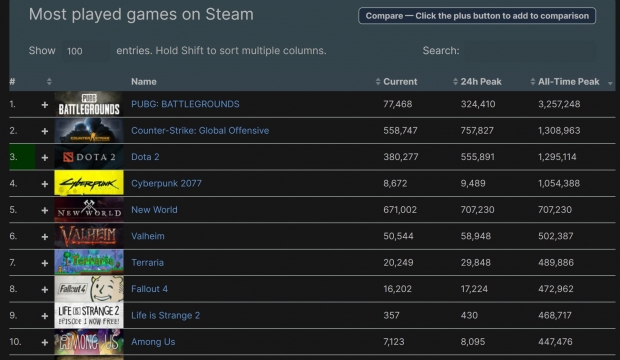 The game is so popular that players are faced with astronomical waiting times to connect to servers. Amazon has issued a statement promising more servers and adjustments to lower queue times.

New World has launched at an opportune time for MMOs. Many World of Warcraft players are leaving the game due to Blizzard's current sexual harassment controversy, and other WoW Classic players are also leaving en masse due to in-game issues (and the aforementioned controversy). It's also likely that some ESO players are crossing over too.

Final Fantasy XIV is still going strong, however, and its big new Endwalker expansion is set for November.