Vlogs are an important part of the content we create and share every day. Imaging approximately 500 hours of video content are uploaded to YouTube every minute, all around the world. Unlike other videos, vlogs are typically recorded with a cellphone or a hand-held camera. They are not as hard to produce as other videos.

VideoProc Vlogger is a free vlog editing software newly released by Digiarty Software. This novice-friendly yet powerful non-linear program comes with a rich set of tools to suffice various editing demands. It's a free non-linear video editor with no watermark.

For novices, VideoProc Vlogger is designed with an intuitive and self-explaining interface. Almost everyone can get his/her hand around this vlog video editor despite vlogging experience. The basic features allow you to split and crop video clips, add text and filters, add transitions between shots, add music to the video, etc.

For more advanced and non-professional hobbyists, VideoProc Vlogger supports premium features that are not covered in other free software.

The Speed Ramping Tool makes it possible to create constant and variable speed changes in your video clips. You can either use the 14 Bezier Curve presets in VideoProc Vlogger or customize your own speed change. Sports vloggers will find it helpful when they need to change the speed of the entire video to highlight some key moments.

Motion effects are powerful additions to your vlogs. In VideoProc Vlogger, you can use the Motion Editor to flexibly add varieties of motion effects, such as pan and zoom and spinning effects. If you have a travel channel, you can create crop opening and closing for seamless transitions. The motion editor can help you imitate camera movement as if the footage is shot in that way.

The Color & Filter Editor allows you to adjust the exposure, contrast, saturation, and so on. The complete color editing tools help cooking inspiration vloggers to make more tantalizing cuisines. Plus with more than 60 built-in 3D LUTs filters, you can color grade your video clips like a pro.

Another great feature that is rare in free vlog editing apps is the Audio Editor. In addition to adding music to video, VideoProc Vlogger also provides some more advanced audio editing functions. For example, you can add sound effects to your audio clips, edit your video to the beat automatically by using Audio Analyzer, and optimize your sound with the Audio Equalizer.

Both beginners and experienced vloggers can benefit from this simple yet versatile vlog editor. VideoProc Vlogger comes with a magnetic timeline to enhance your video editing efficiency and precision. Powered by advanced hardware acceleration, VideoProc Vlogger guarantees the lowest CPU usage and fastest processing speed. You can finally edit 1080p, 2K, 4K, or even 8K videos without choppy on old or low-end computers. 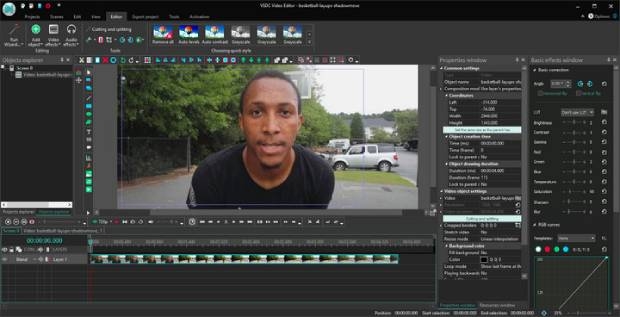 VSDC is a free vlog editing software with rich features. This non-linear video editor comes with a set of functionalities for improving video, audio, and recording voiceovers. All the popular video/audio formats and codecs are supported. The basic features include cutting, cropping, merging video clips, adding music to your vlog, adding texts, filters, effects, and transitions, etc.

As a non-linear editor, VSDC allows you to add multiple layers and move video clips and images to various positions in the timeline. They don't necessarily have to follow a linear sequence.

VSDC can produce really professional-looking videos in experienced hands. For people who are new to vlog editing or non-linear editors, the interface of VSDC may not seem very user-friendly. There are users reporting a steep learning curve.

The other little drawback is that the technical support isn't free. The VSDC Video Editor Help User Manual is available only to registered users of the Pro version, which costs $19.99. But you can get a VSDC Pro license for your school for free.

For a more detailed introduction of VSDC, read this full VSDC review. 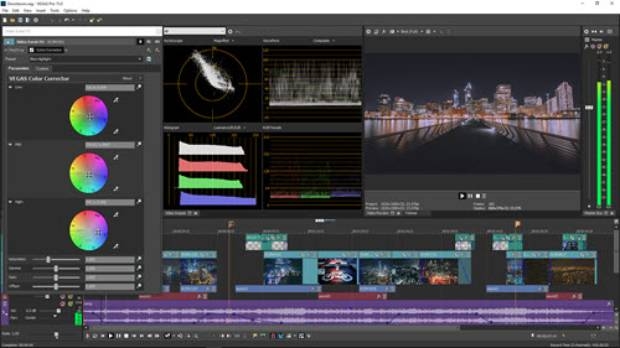 However, there are dislikes of Vegas Pro. For example, some built-in plugins can be laggy and unresponsive, glitches may appear when using GPU to render the clips, the program and the add-ons are a little pricey for novice vloggers, etc. In the long run, this is one of the best vlog editing software you need when you shoot and edit for a living. 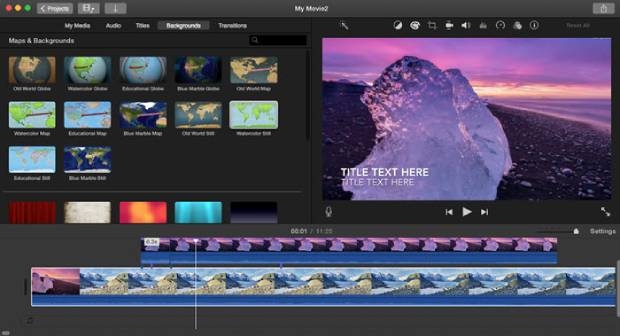 iMovie is the go-to choice for many Apple users when it comes to the best vlog editing software, especially for those who just start to edit YouTube vlogs since it's pre-installed in the device. iMovie provides some of the most basic video editing features. For example, adding and trimming clips in the timeline; adjusting titles and transitions; adding an image, music, and effects, etc. The thing that people like most about iMovie is the intuitive interface. Novices and amateur vloggers will find it's very simple to pick up and use. Besides, iMovie supports 4K-resolution video clips. Thanks to the seamless Apple product integration, you can shoot on iPhone, edit on iPad, and finish on Mac using AirDrop or iCloud Drive.

Despite its simplicity and convenience, iMovie has almost every basic feature, which makes it perfect for editing quick and short vlogs. More advanced users may find it's not as powerful as other vlog editing apps, and less ideal for more creative scenes. 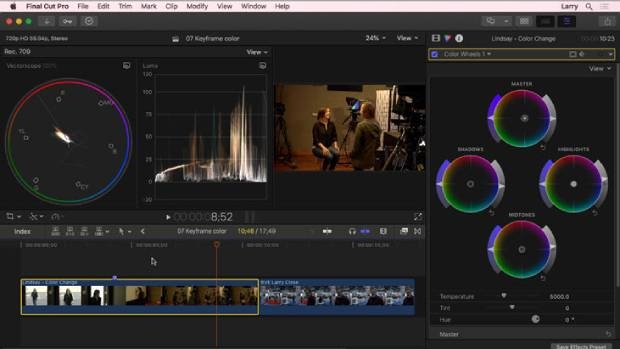 Final Cut Pro definitely ranks as one of the best vlog editing software, especially for Apple users. It's like the big brother of iMovie, and Apple makes the transition between iMovie and Final Cut Pro really smooth. You can open iMovie projects in Final Cut Pro for more advanced edits. It's perfectly optimized for macOS and Mac hardware.

Besides standard features of basic editing, Final Cut Pro comes with some sophisticated features, such as color grading, HDR video support, 360-degree video editing, multi-cam, 4K, 8K resolution, and so on. The interface is intuitive and comprehensive. Well, there are opinions that the image-heavy UI and timeline put skilled video editors at a disadvantage. But for people new to editing vlog and have some experience with the Apple ecosystem, Final Cut Pro makes the process much easier.

This one-time purchase video editing software costs $299.99, which is a little bit of an investment, so it's a good choice for long-term YouTubers. In fact, Final Cut Pro is the vlog editor used by many famous YouTubers, like Alfie Deyes from the UK and Casey Neistat from America. 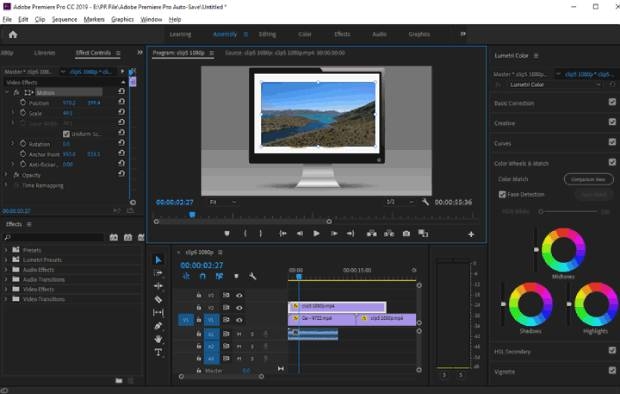 Adobe Premiere Pro is geared for professional video editors, so it packs with an unmatched suite of powerful features, including 4K and 8K resolution, ProRes HDR rendering, 360 VR content, and professional-grade Lumetri Color tools. Actually, it's used to edit Hollywood films like Gone Girl and Deadpool. With such a robust set of tools, there's not much you can't do in Premiere Pro.

What people dislike about Premiere Pro is mainly the high cost and the learning curve. If you plan to use it as your long-term vlog editing software, you'll have to pay at least $239.88 per year or $20.99 per month. Frankly, it's not very beginner-friendly, and you'll have to really take your time to achieve professional results.

Quik is released by GoPro. You'll love this vlog editing app if you have a sports channel on YouTube and want to quickly edit a vlog on your smartphone.

Quik was once discontinued and is now back from the dead to help you get the most out of your favorite photos and videos. Quik is a device-agnostic vlog editing app, which means you even don't need a GoPro to enjoy the GoPro services. When you download and install it, Quik will automatically post your videos and photos to your private Mural feed, so that you'll never lose track of them again. It works with everything on your camera roll, whether it's from GoPro, a DSLR, your phone, or other devices. Quik offers simple yet powerful editing tools. Another highlight feature of Quik is that it can create amazing highlight videos automatically. Plus, it works well with GoPro. You can turn your phone to a remote control for GoPro, and transfer your shots wirelessly to your phone for easy editing and sharing.

Note: there may be in-app purchases. Some editing features will cost extra. 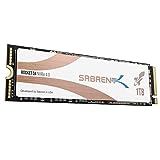