Intel's upcoming Xe-HPG gaming graphics card is back in the spotlight with Tom at Moore's Law is Dead posting a new video with some juicy new information. Check it out:

In the video we're told that Intel's upcoming Xe-HPG graphics card will have a 512 EU (Execution Units) model that is "initially designed" for TSMC's N6 node -- this could be changed, however -- packing 16GB of GDDR6 memory on a 256-bit memory bus. As for power, Tom reports that his sources tease Intel Xe-HPG's top model will have a 225-250W TDP but they have "since pushed it harder" up to 275W.

As for performance we're looking at somewhere between NVIDIA's new Ampere-based GeForce RTX 3070 and GeForce RTX 3080 graphics cards with Tom pointing out that his sources said "Top Xe should be treated like an RTX 3070 Ti. That is where the majority of samples are performing". As for 3DMark TimeSpy benchmark results the new Intel Xe-HPG in early samples is throwing out scores that are between the GeForce RTX 2080 and the flagship GeForce RTX 3090. 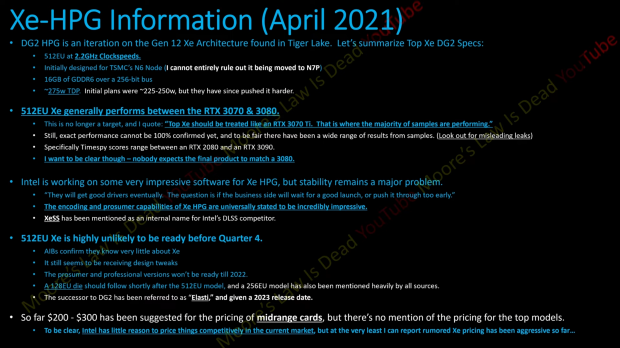 Some hero shots of the new Intel Xe-HPG graphics card, with a dual-fan cooler in its reference test design and 8+6-pin PCIe power connectors with up to 275W of power on tap.

There's some other interesting factoids there with Tom saying his sources said the software side of Xe-HPG is going to be great but "stability remains a major problem". Tom's sources tell him that the encoding and prosumer capabilities of Xe-HPG are "universally stated to be incredibly impressive". 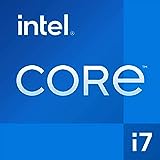