Hello Games has just pushed out a pretty damn huge update for No Man's Sky with its new 3.5 update codenamed Prisms, with a visual overhaul, and even more -- with some special sauce with NVIDIA's DLSS tech included.

If you're playing on the PC, Xbox Series X/S and Xbox One X or PlayStation 5 consoles then you'll get screen space reflections with the new Prisms update for No Man's Sky. This will add reflective surfaces and improved lighting quality to countless locations in the game. These upgrades will include the Space Anomaly, space stations, Atlas stations, freighter hangars and derelict freighters.

NVIDIA is adding in its DLSS technology into No Man's Sky, which will have a bonus for PC gamers where DLSS will be working in VR mode -- beautiful.

There's colored and directional volumetric lighting that will improve the atmosphere in the game, with Sentinel drone searchlights and spaceship headlights, and even the glow of bioluminescent flora. You even have dynamic brightness with the Exosuit torch, too... No Man's Sky will never have looked better. 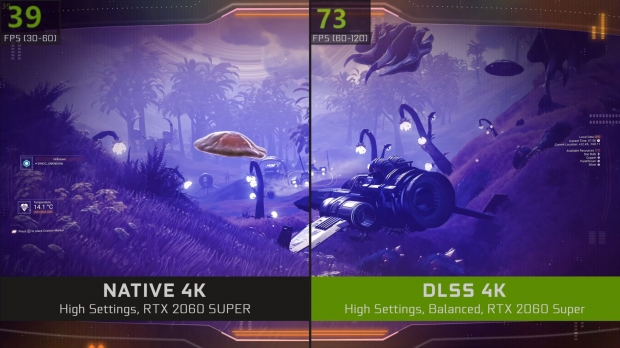 NVIDIA has teased that DLSS upgrades to No Man's Sky unleash some major performance, with a last-gen mid-range GeForce RTX 2060 SUPER graphics card running native 4K on High settings at around 39FPS average -- while DLSS 4K on Balance cranks up to a huge 73FPS average.

There's also more stars in space and the skies at night, which once again means No Man's Sky will have never looked better than it did before its 3.5 Prisms update.

No Man's Sky Revealed: A Newcomers Guide to Companions and Later