Ethereum is soon transitioning from mining to staking with the move to proof-of-stake reducing power consumption of Ethereum. The Ethereum Foundation says that the blockchain's power consumption will drop by over 99% making it around 7000% more energy-efficient than Bitcoin which is still reliant on mining.

In a new post on the Ethereum Foundation Blog, Carl Beekhuizen said: "Ethereum will be completing the transition to Proof-of-Stake in the upcoming months, which brings a myriad of improvements that have been theorized for years. But now that the Beacon chain has been running for a few months, we can actually dig into the numbers. One area that we're excited to explore involves new energy-use estimates, as we end the process of expending a country's worth of energy on consensus".

There's no way to know exactly how many miners there are in the world, or what hardware they're running at any given moment in time -- so Beekhuizen says that this is a "ball-park estimation of the energy consumption of the future of Ethereum". 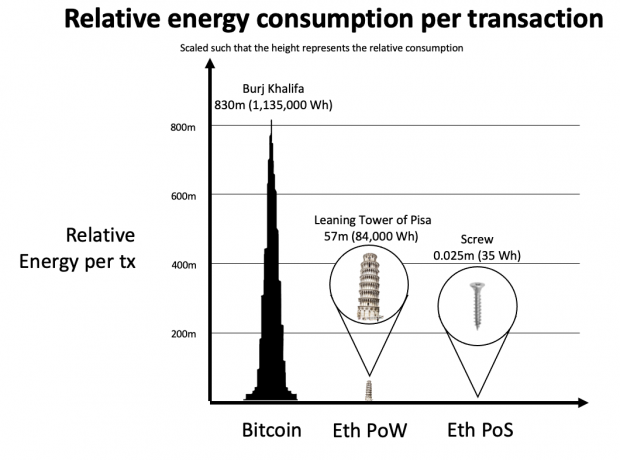 Look at that beautiful graphic -- the approximate energy cost per transaction breaks down with Bitcoin using 1,135,000 Wh while Ethereum in its current proof-of-work (PoW) uses 84,000 Wh... but oh boy, those Etherum proof-of-stake (PoS) numbers are mind-blowing with just 35 Wh used.

Beekhuizen writes: "For reference, Proof-of-Work (PoW) consensus on Ethereum currently consumes the energy equivalent of a medium-sized country, but this is actually necessary to keep a PoW chain safe. As the name suggests, PoW reaches consensus based off of which fork has the most "work" done on it. There are two ways to increase the rate of "work" being done, increase the efficiency of mining hardware and using more hardware at the same time. To prevent a chain from being successfully attacked, miners must be doing "work" at a rate greater than an attacker could. As an attacker is likely to have similar hardware, miners must keep large amounts of efficient hardware running to prevent an attacker from out-mining them and all this hardware uses a lot of power".