Activision kicks off its 2021 year with record earnings across the board due to strong performance of Call of Duty (Warzone, Black Ops Cold War), Candy Crush, and World of Warcraft. 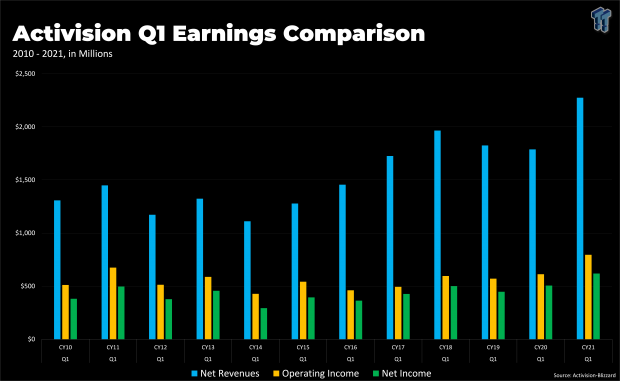 Activision's Q1 2021 has delivered record results across a number of metrics. Q1 2021 was the best first quarter in the last 10 years when measuring net revenues ($2.275 billion), operating profit ($795 million), and profit ($619 million). In fact, Q1 2021 had the best operating profit of any other quarter in the last 10 years. The period had the third-best revenues of any quarter, and the second-best profits when compared to other quarters. 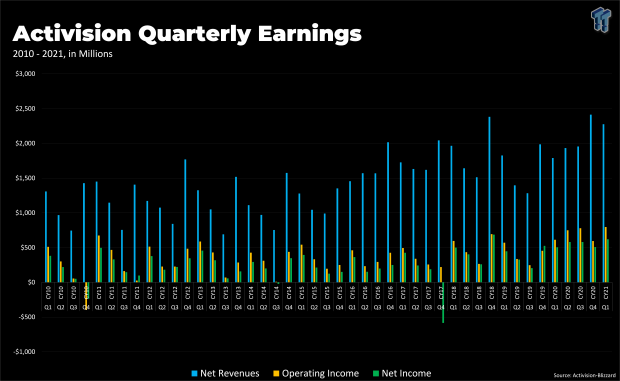 The company notes this substantial growth is due to Call of Duty monetization (up 60% YoY) and full game sales, and Activision also earned $1.343 billion from mictotransactions, representing 65% of its total net bookings.

Check below for a breakdown from Activision:

Now, for the quarter, we generated Quarter 1 GAAP revenues of $2.28 billion, $260 million above our February outlook. This includes the net recognition of deferrals of $209 million. And net bookings of $2.07 billion were $316 million above our outlook. And we generated GAAP EPS of $0.79 and Quarter 1 non-GAAP EPS of $0.98, which was $0.14 above our February outlook. These figures include the net recognition of deferrals of $0.14.

King's revenue grew 22% year-over-year to $609 million. This is a new record led by strong in-game revenue growth for Candy Crush.