Facebook is currently facing considerable backlash over the decision to merge Oculus and Facebook accounts. The company has been met with criticism from past Oculus users, would-be Oculus users, and critics alike. It's even dealing with a lawsuit from the German government over the move. And yet, the company has remained steadfast in its decision and has yet to waver. 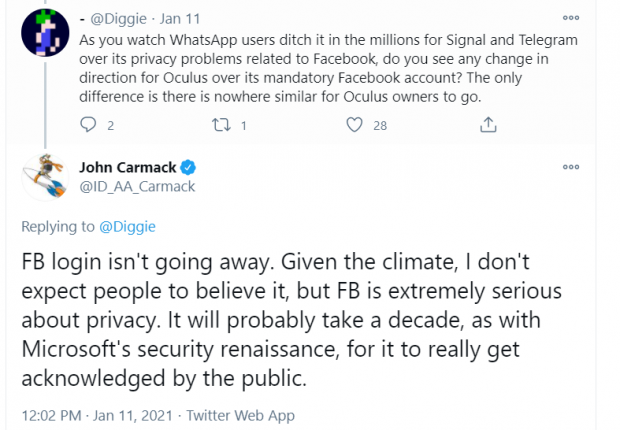 Facebook has recently dealt with a mass exodus of Whatsapp users after a change to its privacy policy. Given the backlash, one Twitter user called Diggie sent John Carmack a question regarding a possible shift in user account policies. Also noting that unlike Whatsapp users who can go to Signal or Telegram, VR fans don't have an alternative to flock to.

Carmack took the time to respond to Diggie directly, but the answer will surely disappoint many. He reiterated that Facebook login is here to stay, adding that it could take a decade to gain public trust about security.

The response seems somewhat tone-deaf, but Carmack doesn't have control over these aspects of the business, so he can only toe the company line.