A new FPS test from VG Tech illustrates how the PlayStation 5 and Xbox Series X can both maintain consistent 120FPS in Destiny 2 on variable refresh displays.

120FPS games aren't super widespread on next-gen consoles, but a handful of titles like Destiny 2, The Master Chief Collection, Dirt 5, Call of Duty Black Ops Cold War, and Rainbow Six Siege can all hit the blistering-fast frame rate. Devs are coming right out of the gate with big optimizations that leverage the new Zen 2 CPUs and Navi 2x GPUs found in the PS5 and Xbox Series X. These games can technically hit 120FPS...but how often do they stay there?

A new comparison video from VG Tech shows that Destiny 2 hits a stable 120FPS on both consoles without any major fluctuations. The higher 120FPS mode is only available in the PVP Crucible gametype, and the game reverts to a dynamic 1440p resolution in order to hit such a high frame rate. Still, though, the game doesn't drop below 117 FPS the entire time...which is a pretty big development for console hardware. 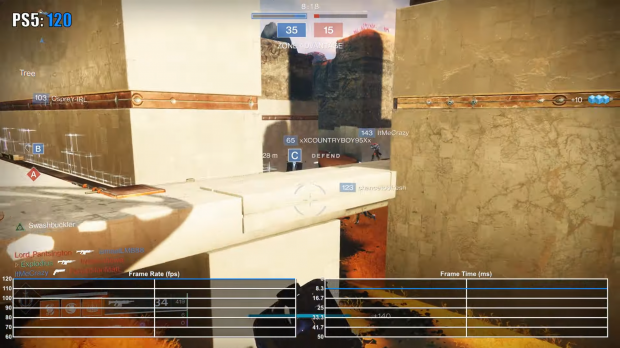