Call of Duty Mobile has been a tremendous success right out of the gate, amassing nearly half a billion dollars in revenues and taking the #3 spot in the U.S. in its first year of availability. 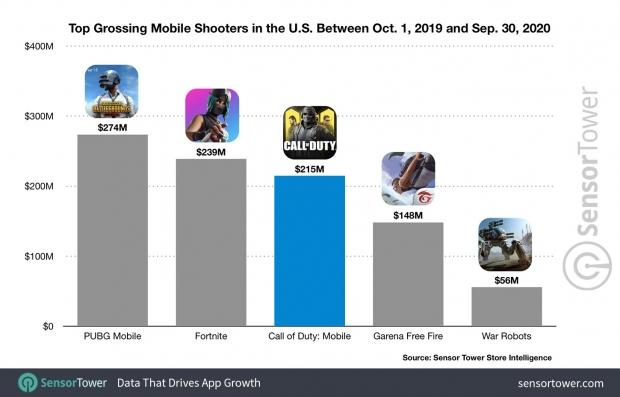 There's nothing like Call of Duty; the IP is a trend-setter and its annualized installments routinely rake in hundreds of millions in game sales and long-term monetization for Activision. Now with the new mobile-based Call of Duty game, Activision has expanded its focus to tap gaming's most lucrative platform. And tap it the company has; the free-to-play CoD Mobile has generated $480 million in microtransactions in its first year on the market.

According to analyst firm Sensor Tower, Call of Duty Mobile has made considerable revenues since releasing in October 2019. The game has earned about $480m in mTX spending and overall earnings peaked in Q2'20 during the coronavirus lockdowns. Downloads sit at about 270 million worldwide, but CoD Mobile is doing extremely well in the U.S., where it's taken the #3 top mobile shooter spot behind Fortnite (#2) and PUBG (#1).

The F2P game's success lies with Activision's new four-part plan, which emphasizes monetization, full game releases, mobile ports, and new engagement models. We've seen evidence of the last two with a number of mobile-based releases of Activision-Blizzard's most popular IPs, including CoD and the upcoming Diablo Immortal, and the latter, new engagement models, is highlighted with the unique cross-progression/cross-play/cross-SKU business model of Call of Duty Warzone.

CoD Mobile is an important piece to Activision's earnings pie, but Warzone represents the biggest thing the company has ever done. Check our video below for more info on why Warzone is so transformative: