Gravity Lab appears to be the first Quest game to get a Quest 2-specific update. The game developer pushed a graphics update for the game over the weekend, and the difference is impressive. 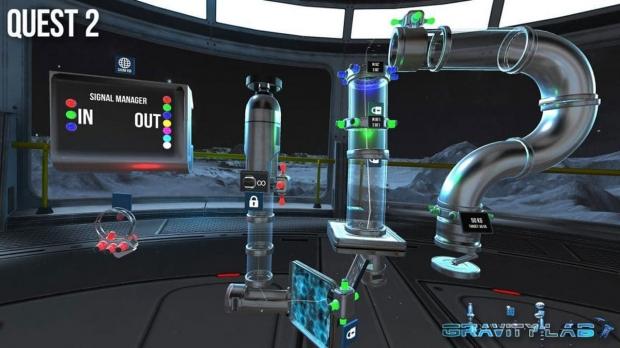 Gravity Lab is a 6DoF physics-based puzzle game for virtual reality. The title has been available for some time on PC VR, and it recently debuted on the Oculus Quest platform. In porting the game to Quest, the developer had to reduce the graphics fidelity of the game. Things like multiple light sources and reflective surfaces had to be removed to meet the performance needs.

Quest 2 is much more potent than the original Quest, allowing developers to push their titles even further than before. Mark Schramm, the creator of Gravity Lab, is lucky enough to have a Quest 2 ahead of launch, allowing him to prepare an update for his game before the hardware ships to consumer next month.

Over the weekend, Schramm pushed an update for Gravity Lab that improves the graphics significantly. On Quest 2, the game looks a lot like it does on a PC VR system. As you can see from the comparison image, metal pipes look metallic on Quest 2, where they appear dull on Quest. You can also see the light coming from multiple directions in the Quest 2 screenshot, where the lighting on Quest is much more localized.

The Quest 2 Gravity Lab update is already live on the Oculus Store. If you have access to the new headset already, you can try it out today.